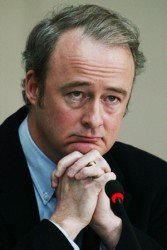 Warren Kinsella, touted as a “Liberal badboy“, showed his true colors a week ago on his blog and again last night on Sun TV.

Warren Kinsella despises you, too, if you have the audacity to believe the first line of defense against violent criminals is you, the person actually present when the violent criminal strikes, and not the police.

A week ago the moronic Kinsella wrote the following:

If you don’t favour a ban on private ownership of handguns, you’re a fucking idiot

Obviously Warren Kinsella can’t comprehend the simple truth that criminals don’t obey laws.  That is why, after all, they’re referred to as criminals.

Warren Kinsella can’t comprehend that it’s already illegal for a person to merely point a firearm at another human being, let alone shoot them with one!

Nope, according to Kinsella, a handgun ban will solve all the world’s problems.

Warren Kinsella is a moron.

He naively believes that if we disarm the good people, namely law-abiding citizens, that the bad people, namely violent criminals who kill people in shopping malls and at block parties, will magically behave like decent human beings.

He believes Ian Thomson of Port Colbourne, Ontario, should have just stood there like a good little Liberal and dialed 9-1-1 while three masked thugs attempted to kill him by burning his house down around him with Molotov cocktails.

It goes without saying that both Ian Thomson and I believe quite differently, and that it’s Warren Kinsella, not a handgun owner, who is the “fucking moron“.

On Sun TV last night (June 25, 2012) the “fucking moron“, Warren Kinsella, went a step further, explaining to us poor, stupid neanderthals that the police are amazing, and even in rural Canada they should be allowed to do their jobs.  We should not defend ourselves from violent criminals but should, to quote another Liberal moron, “leave that to the professionals.”

“We have excellent police officers,” Kinsella said on Sun TV’s show Byline. “We have detachments all across rural Canada; they’re an important part of rural Canada and no, I don’t think that we should usurp their function and start shooting people we suspect of being bad guys.  We should do what the police tell us to do and say ‘No, don’t shoot somebody, just because you think they’re a bad guy.  Call us up and we’ll help you out.'”

Yeah… okay… Gotta love folks who don’t have to live in the real world.

Like all good Liberal idiots, Warren Kinsella believes completely (if mindlessly) in the police motto “To Serve and Protect“.  Who cares that the courts continually rule the police have no duty or obligation to protect anyone?  Who cares if police don’t arrive until long after you’re dead?

That’s irrelevant, according to the all-knowing Warren Kinsella.

The police are the professionals.  Leave crime fighting to them. Just dial 9-1-1 and everything will be okay.

Tell that to the family of Janice Kinna if you’re brave enough, Warren.  I dare you.

On April 7, 2004, a neighbour heard screams coming from Janice Kinna’s apartment in downtown Regina, Saskatchewan. You know, the city with the highest police presence in the nation?  Well, it took Regina police 31 minutes to reach Janice’s apartment, by which time she was dead; murdered by the man she’d been dating, Kenneth Eldon Ireland.

Or how about Doreen LeClair and Corrine McKeown? They called 9-1-1 FIVE TIMES over 8 hours before the police finally showed up, only to find the two women murdered inside in their Winnipeg home.  They were killed  by McKeown’s former boyfriend, William Dunlop, who answered the phone when the 9-1-1 operator finally became concerned and called them back.  Of course the women were dead by then, but hey, that’s okay, right Warren?

These are the exceptions, of course, to police response times in Canadian cities.  They are examples, horrifying proof if you will, that Warren Kinsella is lying when he says the police will protect you if you simply call them.

They will not…  They CANNOT be everywhere at all times.

It’s not that the police are bad.  That’s the one thing Kinsella is right about.  We have, on the whole, excellent police forces in Canada.  That doesn’t mean they can be everywhere we need them.  Janice Kinna’s death proves that much, if nothing else.

But those of us living in rural Canada already know this fact.  We know that police, even if they leave the police detachment the second after our frantic emergency call, won’t arrive for at least half an hour.

We’re entirely on our own for those 30 minutes or more.  That’s a long time to stand there doing nothing but wait.

Don’t be, to use Kinsella’s own words, “a fucking idiot” and think the police will save you in that situation.  They can’t.  Not even if they want to.

Warren Kinsella has obviously never stepped foot outside the Ottawa city limits, because in rural Canada the very best we mere citizens can hope for, if we don’t take care of ourselves when violent criminals come calling, is this: the police will arrive long after the criminals have done their worst, and they will draw a pretty little chalk line around our cold, dead body.

That’s hardly a comfort except, I suppose, to morons like Warren Kinsella.

When you live over 30 minutes from the nearest police station, do you seriously believe anyone will arrive in time to save you?  That is, of course, IF you get the chance to dial 9-1-1 in the first place as some scumbag is doing his best to kill you.

The only person who has the luxury of believing that crap is a complete and utter “fucking idiot” like Warren Kinsella, safe inside his ivory tower.

Watch this buffoon on national television for yourself.  Decide for yourself who the moron is… Kinsella, or law-abiding citizens who happen to own firearms and believe they, not the police, are the first line of defense against violent criminals.

Be amazed that someone this fundamentally stupid can walk, talk and write books telling us “mere citizens” what we can and cannot do in the face of an attack by violent criminals.

Just ban handguns and the world will be a safer place.  It’s simple.

That obviously explains why Chicago, IL, and Washington, DC, two cities that ban handguns, have the highest murder rates in America.

Thanks for making things so clear, Warren.