Politicians and bureaucrats have an incredible talent for sending precisely the wrong message.

In this regard the Government of Ontario and the City of Toronto have combined for a new all-time low: blaming two award-winning sport shooting youths for Toronto’s ongoing gun and gang crime problem.

Chris Baldwin, 18, and Sabrina Sergeant, 17, are both very accomplished athletes. They both devote countless hours every week to hone their skills so they can reach their current goal of winning the Ontario Summer Games in August.

They are perfect examples of what we should promote to young people everywhere: dedicated, focused, hard-working, goal-oriented and most importantly, law-abiding.

These two young athletes are also, according to Ontario government officials, to blame for all of Toronto’s gun crime.

That is logic that only a politician can comprehend.

Unfortunately due to the untimely shootings that have taken place in Scarborough and the City recently, we have received a directive that we can no longer have the Sporting Rifle Athlete Ambassadors present on stage at the World Record Camp Games event. This is unfortunately something that has been handed down to us out of our control and we deeply apologize.   We realize that gun violence has nothing to do with the sport of Sporting Rifle or any of your Athletes and that your sport promotes the safe and responsible use of rifles.  We appreciate your understanding of this matter and apologize to both the CSSA and your Athlete Ambassadors sincerely.  Should you have any questions, please contact Cathy Vincelli at 416-397-5349.

If Michael Fusco, Cathy Vincelli, Ontario Summer Games and World Record Camp Games event organizers, the Province of Ontario and the City of Toronto comprehend “that gun violence has nothing to do with the sport of Sporting Rifle or any of your Athletes and that your sport promotes the safe and responsible use of rifles” then they should be plastering the city with billboards of these two athletes, promoting them as role models for other young people across Ontario.

Instead what do these politically-correct, anti-gun, mind-numbingly stupid cowards do? They tell two gold medal-winning sport shooters are not welcome as Ambassadors to promote the World Record Camp Games.  They paint two highly successful young athletes with the same filthy brush as criminal gang members who murder people indiscriminately in crowded shopping malls and block parties with illegal firearms.

Disgusted doesn’t even begin to express how I feel about Michael Fusco, Cathy Vincelli, Ontario Summer Games and World Record Camp Games event organizers, the Province of Ontario and the City of Toronto.

Chris Baldwin, 18, is the Overall National Sporting Rifle 3-position champion three years in a row and the National Junior prone champion.  He competed in both the 2008 and 2010 Ontario Summer Games, winning three gold medals and Provincial Junior Champion in several events. He won a gold and silver air rifle medal at the 2011 Canada Winter Games and in 2009 he won first place at a Youth Olympic Games match held in Colorado Springs where he competed against youth from North and South America.

Sabrina Sergeant, 17, won gold and bronze at the 2010 Ontario Summer Games and has only been shooting competitively for 5 years.

Do these two young people sound like they’re responsible for gang violence in downtown Toronto?

Only if you’re a politician living in Toronto.

To the rest of the country these two teenagers are the perfect example of the kind of young person we should hold up proudly as examples to others.

Instead the Ontario and Toronto governments have, as Matt Gurney of the National Post said so perfectly, “tossed them under the bus of political correctness.”

“We are stunned at the treatment that these two young athletes have received from the City of Toronto and the Province of Ontario.  These teens are very disciplined and have refined their craft over many years, and now some faceless anti-gun bureaucrats are associating them with drug dealing, gang member criminals. They were invited to act as ambassadors and they are ideally suited for that job. They are perfect examples of what today’s youth should aspire to be.  How can our provincial government be so blind and sink so low?”

Sadly, it’s very easy.  Government officials turn their brains off at the first mention of the word “gun”.  They don’t care what context the word is used in.  That doesn’t matter.  Guns are bad therefore all people who use them are bad as well.

Needless to say, I disagree.

So does Tony Bernardo, the Executive Director of the Canadian Shooting Sports Association.

“If a criminal uses a knife to stab somebody, do we take all the celebrity chefs off the air?  If someone is murdered with a baseball bat, do we blame the Blue Jays?  There is zero common ground between these young sport shooters and the vicious thugs who take part in public shootouts.”

“The East Elgin Sportsmen’s Association has been actively shooting for the past 56 years and there has never been so much as a band-aid required. It’s the largest junior program in Canada and we average 60 kids from age 10 to 19 every Friday night during the winter. This is how you keep kids out of gangs and off the streets.”

Dr. Mike Ackermann of the St. Mary’s Shooting Club in Nova Scotia created a great poster that sums up the stupidity of publicly shunning these two athletes. 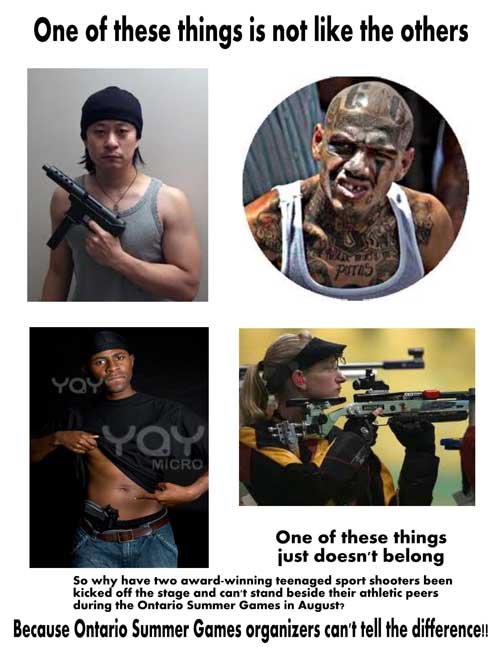 Let me remind the buffoons running Ontario, Toronto and the Ontario Summer Games of something very important.

Sabrina Sergeant and Chris Baldwin are the best examples of firearm use we could possibly hope for, but instead of proudly holding them up for all to see, Ontario Summer Games organizers and the governments of Ontario and Toronto have shunned them and told them in no uncertain terms that they are no better than drug dealers and gang members.

What kind of a message is that to send to two dedicated young athletes and Canadian youth in general?

Precisely the wrong one.