In what can only be described as the bad guys getting precisely what they deserve, a story out of Vancouver, Washington really put a smile on my face.  A couple of juvenile delinquents decided young Priscilla Dang was a good target for harassment but they quickly learned otherwise. 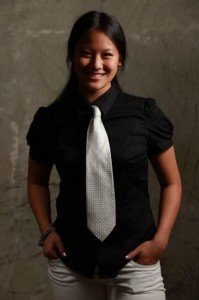 Priscilla was jogging alone on June 15th when two young degenerates approached her.  They were on bikes.  One of them cut her off while the one behind her groped the young woman.  Anywhere that has common sense calls that sexual assault, and instead of capitulating to these two little perverts Priscilla thought she’d teach them a lesson in civility.

She grabbed the little jerk who had molested her and demanded he apologize.

“I grabbed him and said, ‘You need to apologize, and he did,'” said Dang.

Then the second little pervert decided to ramp things up a notch or two.  He started swearing at the young woman.  She retaliated with a couple of punches to the rude delinquent’s face, and that seemed to upset him.

Apparently he isn’t used to his victims fighting back.  That’s when he made an even bigger mistake.  He decided he’d go after Priscilla physically.

“He started coming in for a few, and I was lucky enough to dodge his shots. I came up for another one and I got him good, and I think that upset him,” she said.

Then the delinquent pulled a knife out and threatened the young lady with it.

No point getting into a fight with an upset juvenile delinquent with a knife, she thought and backed off.  Fortunately there were a couple of witnesses to the entire confrontation and they called police, who quickly apprehended the teenagers.

The two are 16 and 18 years old, and unfortunately now the justice system will kick in and do what it does best:  take the side of the abusers, not the abused.

The 16-year-old was turned over to his parents.  In other words the kid totally gets away with it. Yeah, that really ought to teach him a lesson.

The 18-year-old was arrested and will likely face charges of assault.  Why the 16-year-old was not arrested too is utterly beyond comprehension.

As for Priscilla Dang… what a brave young lady.  She is to be congratulated for not letting two uncouth young men harass her; for standing up for herself with dignity.

“I think they knew they messed with the wrong girl,” she said.

While this story had a very happy ending (unless you’re one of the two uncouth little brats who were on the receiving end of the lesson that day, that is) I have to wonder how many other young women these two pathetic excuses for humanity have accosted and abused before?

We’ll never know the answer to that question, will we?