“The public has a right to know.”

That saying is based on the idea that it is best that we, the people, know what is going on around us, both good and bad.

The never-ending battle for Freedom of Speech is based on the conflict between the right of “we the people” to know things, and government censors and their minions to keep information secret that can and does directly affect us.

That’s exactly the issue with British Columbia’s government, led by the useless and self-serving Christy Clark, and headed by Agriculture Minister Don McRae. 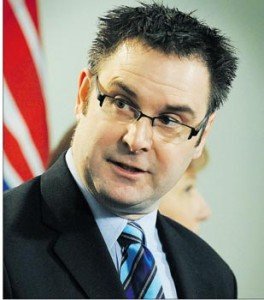 Agriculture Minister McRae introduced Bill 37, titled the “Animal Health Act”, but it would have been better titled “The Animal Health Secrecy Act” since it makes it a crime for anyone to make it known publicly there is a disease outbreak in any animal population.  That crime would be punishable by 2 years in prison and a $75,000 fine.

It sounds like something out of a fiction novel or maybe the tinfoil hat crowd, but it’s not.

Under section 17 of this disgusting law it would be a crime for anyone, no matter who they are or who they work for, to divulge information regarding animal diseases publicly, such as the rampant diseases currently decimating farmed salmon in BC, for example.

Under the heading “Protected Information” it says

16  Except as permitted under section 17 [duty to keep information confidential] or 18 [personal information], a person must refuse, despite the Freedom of Information and Protection of Privacy Act, to disclose the following:

(a) information that would identify the person responsible for an animal or an animal product or byproduct;

(c) information that would reveal that a notifiable or reportable disease is or may be present in a specific place or on or in a specific vehicle;

(e) information that is derived from a sample taken under this Act or that is submitted to the ministry of the minister or a laboratory identified in an order of the minister.

Notice it says a person must refuse to divulge any information they may have concerning disease in animal populations, including who caused the problem, where the disease occurred, the extent of it, etc.

So much for “the public’s right to know” about diseased food that is being sold in stores, for example.  Nope, the Christy Clark government believes you have no right to know the food you eat is diseased.

Does that sound in any way rational or sensible?

Not to me, and not to Privacy Commissioner Elizabeth Denham, either.

Denham wrote a letter to Minister McRae, calling Bill 37 extreme.  She made it clear “this is a matter of deep concern considering the importance of disease management” and tied it directly to the issue of salmon farming.

“I also refer you to this office’s Order F10-06, which required your ministry to disclose the results of random audits related to the presence of disease on fish farms. While this order may be the basis for the ministry’s desire for greater confidentiality of such test data, the bill as drafted would result in the protection of records well beyond the scope of those disclosed pursuant to that order.”

Naturally, Agriculture Minister Don McRae says the restrictions on Freedom of Speech don’t apply to the general public or to journalists.

That’s not how the proposed law reads, however, is it?  Note the language of section 16.

16  Except as permitted under section 17 [duty to keep information confidential] or 18 [personal information], a person must refuse, despite the Freedom of Information and Protection of Privacy Act, to disclose the following:

“A Person” is pretty simple language.  Any reasonable person would conclude that “a person” means just what it says and is not restricted to any specific group of people; that it includes all “persons” no matter who they are or who they work for.

Clearly Minister McRae is not a reasonable person.

Despite McRae’s backpedalling, the term “person” is not defined in Definitions section of Bill 37, leaving the term defined by the standard dictionary definition.

Doing his best Orwellian Double-Speak, McRae made the claim that the guarantee of Freedom of Expression contained in Canada’s Charter of Rights and Freedoms would override any “purported limitations” of his asinine Bill 37, that doesn’t explain why he would introduce a bill designed to do exactly that: restrict our Freedom of Speech.

“For me it means two years in jail if I report disease in farm salmon such as when I reported positive tests for Infectious Salmon Anemia virus and a Norwegian Heart virus – diseases the federal government and the salmon farming industry swear do not exist in BC.”

What was the actual purpose of this bill?  To get greater compliance in reporting disease outbreak from farmers, including those operating fish farms.

There are better ways to gain compliance than threatening anyone and everyone, regardless of who they are and where they work, with 2-year jail terms and $75,000 fines if they dare utter a word about a disease outbreak at a fish farm, for example.

“If Minister McRae wants higher disease reporting compliance, why didn’t he create a Bill to make it mandatory that all farmers in BC report disease, instead of attempting to take away free speech in violation of the Constitution of Canada?” asked biologist Alexandra Morton.

For those wishing to learn more about this issue its roots in salmon farming specifically, I urge you to read Alexandra Morton’s blog.  She’s done a ton of work on the issue of diseases in salmon farms and how diseased salmon is sold daily in major supermarket chains across Canada.

If that last sentence scares you, it should.

Here is a brief segment titled “Background on Bill 37 – Where did this attack on democracy come from”, from Alexandra Morton’s blog.

Background on Bill 37, where did this attack on democracy come from?

In 2004, the T. Buck Suzuki Foundation made a Freedom of Information Request for specific salmon farm disease records. The Ministry of Agriculture refused this request and the issue came before the Office of the Information & Privacy Commissioner. In Order F10-06 the four big salmon farming companies operating in BC Marine Harvest, Mainstream, Grieg and Creative Salmon are all quoted threatening BC that they would never give the Province disease information again. The Commissioner ruled the information must be released, however T. Buck Suzuki Foundation decided not to release the information.

Regardless in April 2010, the salmon farmers made good on their threat and the Province of BC was no longer given access to dead farm salmon, even though the Provincial vet, Gary Marty, continued to perform private tests for the same companies. That month the three Norwegian operators signed a Memorandum of Understanding with each other to share information about viruses. Marine Harvest began repeatedly going to the provincial vet requesting tests for the exotic virus, Infectious Salmon Anemia (ISAv).

Though T. Buck Suzuki Foundation never released the data, the Cohen Commission did. In it were over 1,000 reports by Gary Marty of “classic lesions” associated with Infectious Salmon Anemia, an exotic virus. This prompted Alexandra Morton to begin testing for ISA virus in BC.

November 10, 2011, Minister McRae released a statement  saying: “Reckless allegations based on incomplete science can be devastating to these communities and unfair to the families that make a living from the sea. Since Premier Clark is currently on a trade mission to China, I have personally asked her to reassure our valued trading partners that now as always BC can be relied upon as a supplier of safe, sustainable seafood..” http://www.newsroom.gov.bc.ca/2011/11/test-results-indicate-no-confirmed-cases-of-isa.html