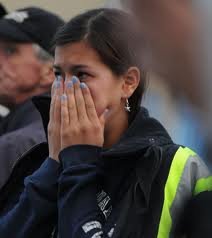 I was horrified to see the so-called experts huddle together and declare victory, despite the fact there were people still tapping from under the rubble of the Algo Centre Mall in Elliot Lake.

The CBC News headline made me want to puke.

5 experts in disaster response agree: ‘You do not risk lives unless you can save lives.’

Can you imagine ANY of the rescue teams at the destroyed World Trade Center acting so cowardly?  Absolutely not!  Those brave men and women were digging out bodies weeks and months after there was any chance of finding anyone alive.  They certainly weren’t about to give up in the first few days!

Here in Canada, however, doing the right thing takes a a back seat to cowardice and bureaucratic red tape.  That makes me ashamed to be a Canadian.

Any ten Canadians chosen at random could have done a better job than the government agency tasked with urban rescue.

Indeed, there were miners among the onlookers who had more experience shoring up underground workings, working in far more dangerous situations, than the so-called experts.

Canadians can puff up their chests all they like and claim they are “Not American!” but there is nothing to be proud of in leaving people to die simply because it might be dangerous to save them.

Of course it would be dangerous you buffoons!  An entire building collapsed and real live human beings were trapped inside!

Civil engineer Sean Tracey, the king of the Coward Brigade, had the audacity to rationalize his cowardice to the families of those still trapped inside the collapsed structure.

“You do not risk lives unless you can save lives. And in this case … it’s just so extremely unsafe for those responders that them attempting to try and do this rescue would probably jeopardize even those that they were trying to rescue.

“So it was the right decision at the right time.”

So those poor people still tapping to let you know they are alive under the rubble… we just say “screw them“, turn our backs on them and declare to the world that we’ve done all we can?

Even more horrifying and disgusting than King of the Coward Brigade Sean Tracy’s comments were the comments of Ontario Provincial Police Staff Sgt. Jim Bock:

“Under no circumstances should a rescuer’s life be jeopardized.“

Why on earth do we have Emergency Response Teams then, if we’re not actually going to use them in, you know,  an emergency???

Staff Sgt. Jim Bock’s comments disgust me more than I could possibly have words to express.

The cowardice of all these so-called experts leaves me ashamed to breath the same air as they do.

I’m generally no fan of Rosie DiManno from the Toronto Star, but this time she nailed it perfectly in her July 27th column:

“Nobody left behind!” shouted one furious resident when word filtered through that crews were standing down. In a mining town like Elliot Lake, this gospel is well understood: Searches are never suspended, whether proof of life exists or not.

Yet by late Tuesday afternoon, those workers had not yet been cleared by officials to resume the job. In a crisis where minutes literally matter, this is simply insupportable. It is the antithesis of rapid response.

Is there really any doubt that the situation would be dealt with differently if it was THEIR family members trapped under that rubble?  No, if that were the case you can bet your life they’d be doing whatever it takes to get those people out.

Is there any doubt that if we were a little “more American” that we would do anything and everything possible to save any possible survivors, just as the heroic rescue teams did at the World Trade Center disaster?

Of course not.  The rescue teams that went in after the September 11 disaster set the World Standard for how you deal with survivors trapped under the rubble of collapsed buildings.  Canada showed herself to be many miles short of that World Standard this week.  We should be ashamed of ourselves, every one.

Whatever happened to the mindless Mantra of the Left…

“If it saves just one life, it’s worth it”

Apparently it depends on whose life it is that might be saved.