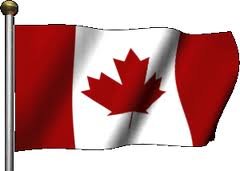 Did you know that Canadians have no right to fly the Canadian flag?  As shocking as that sounds, as unpatriotic as that sounds, this is the reality here in the land of True North Strong and Free.

Fly the Canadian Flag and you can be fined by your condo association and/or your municipality or both, depending upon where you live.

Imagine, if you will… that you are a Canadian veteran who has served your country faithfully and put your life on the line for Freedom and Liberty.  You return home to Canada and years later move into a condo in Edmonton, and because you are a Patriot you place a Canadian flag windsock on your balcony and fly it proudly.

It’s a crime and the Aesthetics Police will hunt you down and make you pay.  Literally.

Bill and Franca Nienhuis were fined $250 by their condo association for the crime of flying the Canadian flag.  When Bill Nienhuis wrote “No Freedom” across the notice and posted it he was fined another $250 for littering.

You see, the good folks (read morons) who control the condo association are clearly proponents of Bureaucrat’s Rule #1:

The Rules Are More Important Than People.

It means nothing that Bill Nienhius served this country faithfully.  It makes no difference that he is a proud Canadian.

He broke the rules, therefore he must be punished.  It matters not that the rules are stupid.

For his crime of exposing their asinine rule for what it was he was fined an additional $250.

Is this the message we really want to send to Canadians as Canada Day approaches?  Serve your country, fly the Canadian Flag, be patriotic and we’ll fine you hundreds of dollars?

I would hope not.

I despise petty bureaucratic dictators like those who infest Bill Nienhius’ condo association.  They do nothing but suck the life force out of good and decent people all in the name of conformity.

Eventually Bill Nienhius paid the stupid fine.  It was that or the condo association would place a lien against their property.  Such is the power of bureaucratic minions of the Aesthetics Police.

Stupid condo rules and municipal bylaws prohibiting the flying of the Canadian flag (or any other nation’s flag, for that matter) abound across Canada.  Their socialist goal is to ensure that everyone acts the same, looks the same (bland) and conforms to the same standard of aesthetics (lifeless).  They would have us all live vanilla ice cream lives and no other flavor.

How sickening. How un-Canadian.

A year or so ago New Tecumseth passed a similar bylaw that sparked an absolutely perfect response from Tim Carter, who wrote:

I see in the Times that council have adopted a Flag Policy. Heaven help the by-law officer that has to implement it. I guess the first step is to go around town and advise all those of Scottish, English and Italian origin that they have to remove there secondary flags. When the International Soccer cup is being played you are going to have a busy job advising the residents of New Tecumseth that they must have approval or remove the flag of their nation. Of course when the Maple Leafs play you are going to have to stop all those cars racing through town with the flag on their cars. Yep its going to be a big job, a make work program, and if enforced is going to cause a lot of irritation amongst a lot of people.

There is an old adage: ‘Never pass a By-law you can’t enforce”. I wonder who the jackass was that thought this one up and just think we are paying him big bucks to do it.

MP John Carmichael thought he would introduce a Private Members Bill to solve this problem.  He sought to make it a crime to prevent someone from flying the Canadian Flag.  Good intention, to be sure, but do we really need a law for this?

Well, in the face of idiotic condo associations like the one in Edmonton that fined a patriotic couple $250, I suppose we probably do.

Unfortunately Carmichael’s Bill C-288 had its teeth removed and is now nothing more than a feel-good exercise in futility.  Instead of actually punishing anti-patriotic ninnies like it did originally, now the text of the bill reads thus:

1. This Act may be cited as the National Flag of Canada Act.

2. (1) All Canadians are encouraged to proudly display the National Flag of Canada in accordance with flag protocol.

(2) Every person who is in control of an apartment building, a condominium building or building in divided co-ownership or another multiple-residence building or a gated community is encouraged to allow the National Flag of Canada to be displayed in accordance with flag protocol.

That’s it. That’s the whole thing.

“Every person… is encouraged to allow…”

Does anyone think this will have any impact on municipal or condo association Aesthetics Police.  If they do, they need to have their heads examined, for they are not living in the real world.

“Our flag is one of the most powerful symbols of our identity. It is loved by all Canadians and admired around the world as a symbol of freedom, democracy, and the rule of law,” said Heritage Minister James Moore.

If only Bill C-288 actually had any real value…

If only Canadians would stand up and tell petty bureaucrats like those that infest Bill and Franca Nienhuis’ condo association that this kind of un-Canadian behaviour will no longer be tolerated.