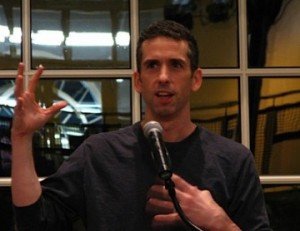 I have a very special treat for you today……. (video below)

I’d like you to meet Dan Savage, the vulgar, homosexual, infamous, self righteous, egotistical, corrupt, sneering, vile, profane, vicious, vengeful, arrogant, manipulative, lying, activist piece of human garbage that runs around terrorizing those who object to homosexuals, their lifestyle and their agenda with respect to the corruption of our children.

(Did I cover all of the personality adjectives?……sorry, I got a little carried away….there was just sooooooo much to cover!)

Dan Savage is a special little man (read: gay activist) who, on behalf of the homosexual community, went on an internet terror campaign against politician and presidential candidate Rick Santorum because Santorum was publicly against homosexuals.

Ever the little prankster, what little Danny Boy did was to seed the internet with thousands of references to Santorum’s last name in context with quote…”the frothy fecal lube foam arising from the anus of a man being sodomised by another man“….

The effect was whenever you Googled the name “Santorum”….. the first 4 or 5 hits on the first Google page would make reference to a false definition of “Santorum” being “the frothy fecal lube foam arising from the anus of a man being sodomised by another man“…… oh how quaint…. oh how utterly gay!!!

Dan Savage, not one to rest on his laurels of success and pop culture notoriety wrought from character assassination, intimidation, threats, blackmail, criminal defamation and virtual extortion, continues to this day, to issue edicts and directives to those he either despises or wishes to influence.  Savage enjoys wide success and immediate capitulation to his demands by using the Santorum strategy as a threat.

In fact, far from being shy, he is quite open, prolific and very public with his threats. As expected, this criminal defamation has escaped the eye of the FBI and other law enforcement agencies as they are as busy as little bees complying with Obama’s orders to remove all references to islam, terrorism and jihad from every training and tactics manual.

Now, in their eternal wisdom, as illustrated in the video above, teachers and administrators have invited this reptile to speak to, and influence, a group of high school students at a journalism conference. This is the model of citizenry our illustrious President Obama wishes our children to emulate. This is the physical manifestation of self righteous, egomaniacal perversion that Obama, Leftists and democrats wish to see marching down the streets of their brave new America. Nothing like a few lessons in frothy fecal lube foam to build character in America’s next generation of citizens and leaders.

Oh how empowered we are, how liberated, how educated, how illuminated, how broad our horizons, how tolerant and diverse our culture to allow the likes of Dan Savage, a presidential appointee, to dictate morals to our children.

As a footnote, thankfully, some of these young men and women had the courage of their convictions and bravely turned their backs and walked out on this poisonous little viper.

Then again, on a tactical note, maybe we should be thankful for human garbage like Dan Savage as he’s responsible for helping America wake up.

The pendulum is swinging back in America and when it has the backlash will be breathtaking……and for the likes of Dan Savage and so many many others…….. well, let’s just say it will be a symphony of retribution….. well-deserved retribution that has been diligently and enthusiastically cultivated for over 5 decades…… and now the end is in sight…..

I am trembling with anticipation……all tingles and smiles…..just waiting….Keep it up Danny Boy, just keep it up!!

Quite frankly I am stunned that no one has dealt this little bastard his just desserts already. A commentary on the decay in our society can be found in the fact that old Danny Boy is a favourite on the socialist/leftist/liberal lecture circuit and the little pet of the president himself no less…… colour me surprised!!!

Its too bad old Danny Savage hasn’t run into a few people from the Bay area of San Francisco…..there are some residents of that area who aren’t given to a limitless supply of patience and enlightened liberal tolerance……..the same folks who shed nary a tear over “Spilt Milk”………say goodnight Harvey!!!

Of course everyone who knows me knows I absolutely abhor violence……. and to be clear I’m not calling for it now here either……. but were I to open the morning newspaper over breakfast one day and splashed across the front page was a photograph of old Danny Boy’s bullet riddled, lifeless, frothy fecal lube foam covered body in the alley behind a homosexual steambath….. well… let’s just say that, after dabbing away a tear or two, I would call for a double portion of marmalade on my toast to soothe my, nearly, inconsolable grief………

Here’s some food for thought,…….

They said it was just about being left to quietly go about their lives. We gave them that but that wasn’t enough.

They said they would never come for our children. They lied.

Maybe the time has come to put a few things back in the closet…. and nail the door shut…… permanently.

PS…On a more ominous note, there are those who have eyed the lining of the White House with a small army of Muslim Brotherhood appointees as gravely injurious. Further injury found in the self serving amnesty to illegals and criminals, further injury in the grossly negligent and purposeful placing of our law enforcement and military men and women in harms way. Now the president has sent his jackals after the children.

And as if that was not enough, add to that the gross indifference to the will of the American people in virtually every edict rendered by a treasonous and seditious president and we have prima facie evidence of the corruption in Washington DC that screams to the individual states that they must fend for themselves and their citizens.