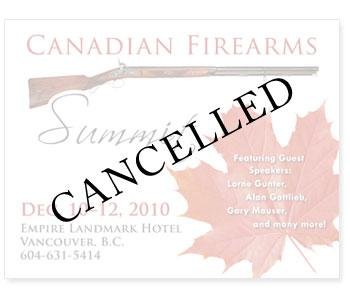 From the NFA’s website, all that’s mentioned is this:

Sorry, this event has been cancelled.

On the CanadianGunNutz web forum a little more information was posted:

Unfortunately the Canadian Firearms Summit meeting planned for December 10-12, 2010 is cancelled. The critical mass of organizations needed to make it work was not attained with CSSA/CILA formally declining to attend as of November 2. Canada’s NFA may well convene another such meeting in 2011, perhaps in conjunction with its AGM. Please contact me directly with your questions.

There was a lot of chatter on GunNutz about the timing of the event, which was only announced in the wake of Bill C-391’s defeat.  One such poster commented;

Is it too late to re-schedule for January? In January:

This poster obviously gave a lot more thought to the logistics than the NFA’s leadership.  Or did they intentionally not want a large turnout?  Invitations were sent to “a select group” according to Mr. Clare, and nobody could attend the event unless he personally signed off on them.

Pretty solid assessment by Griffoneur. If you want to reduce the number of attendees, hold it 2 weeks before Christmas.