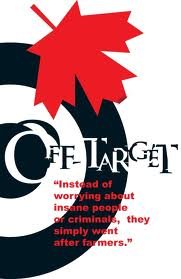 Let me get this straight.  Government bureaucrats screwed up on data entry so that’s why we should KEEP the flawed long gun registry?

That is a ludicrous argument, but that’s exactly what writer Patrick Cain of Global News is saying. Opponents of Canada’s gun registry have long argued that the system is useless precisely because the information in the database is incorrect.

Some estimates of the error rate of data in the federal database are as high as 90%.  At the same time, because of the high error rate information from the registry cannot be relied upon in court.

But we should keep the data.  Yeah, right.

That makes about as much sense as banning ice picks because some pathetic loser killed his gay lover with one.

A redacted copy of the national firearms database, including the doomed long gun data, was released to Global News under access-to-information laws in May. They used that to perform a search of the database and discovered 361 handguns that are incorrectly registered as “non-restricted” firearms.

The 361 handguns include a Colt .45 registered in Halifax, a .38 Special on the island of Montreal, a .357 Magnum in Edmonton and a Luger in the Fraser Valley. In all cases the misidentified guns should be classified as “restricted” or “prohibited” but are instead incorrectly identified as “non-restricted.”

“This is another reason not to destroy the data,” said Opposition justice critic Françoise Boivin.

“If the data that’s destroyed includes restricted and prohibited weapons, that’s a serious public safety risk. A rush to delete the data is going to have all sorts of unintended consequences. This just underscores how reckless the Conservative plan is.”

The Conservative government disagrees, thank God.  The government fully comprehends how error-riddled the federal database is and that is one of the primary reasons it wants the data destroyed, not handed off to provincial governments.

“The data in the wasteful and ineffective former long-gun registry is inaccurate and incomplete. It became more so over time. These problems you have identified show just how useless a tool it was for law-enforcement,” said Mike Mueller, a spokesman for Public Safety Minister Vic Toews.

The reality is that the fear put forward by Patrick Cain is entirely correct.  Law-abiding firearm owners are held criminally responsible for any errors contained in the gun registry database and can be punished with jail time.

Is that stupid?  Of course.  It’s also the way the law is written.

John Evers, speaking on behalf of the Canadian Shooting Sports Association, says faulty database design and implementation is the reason for all these errors.

“They wrote software which made it possible to make a simple mouse-click error. The system allowed you to register a handgun as non-restricted. Any good software engineer would have made sure that can’t happen – that once you select ‘handgun’ you can’t select ‘non-restricted,’ but the system let them do it.”

“We were not all that co-operative,” Evers says of some gun owners’ response to the registry process. “I know several people who put down everything as unknown – unknown make, unknown serial number, because the law said that if you made an error, you were liable for those errors. So to be safe, they said they didn’t know.

It doesn’t matter that firearm owners filled out their registration forms correctly.  Firearm owners are responsible for verifying the accuracy of government records. Yes, that means even after government bureaucrats screw up the data entry.

The owners of the misclassified handguns may have done their paperwork correctly at some point in the past. However, with the registration data destroyed, they could face serious legal problems if they’re found in possession of an unregistered restricted weapon.

“It will now be an unregistered but restricted firearm. The default situation for that individual is that they are now committing a criminal offence. In this case the police could lay a charge, and you would have to argue that out in court. I think these owners are in jeopardy.”

In some circumstances, an offence of this kind can land the gun’s owner a mandatory minimum three-year prison sentence.

As David Tomlinson said so many times before he passed away, “It doesn’t have to make sense.  It’s government policy.”