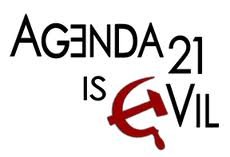 “Land…cannot be treated as an ordinary asset, controlled by individuals and subject to the pressures and inefficiencies of the market. “Private land ownership is also a principal instrument of accumulation and concentration of wealth and therefore contributes to social injustice; if unchecked, it may become a major obstacle in the planning and implementation of development schemes. The provision of decent dwellings and healthy conditions for the people can only be achieved if land is used in the interest of the society as a whole.”

In a move that sent shivers of delight through every Freedom-loving man and woman in North America, both houses of  the Alabama State Legislature unanimously passed Senate Bill 477 (SB 477) and sent a very clear message to the United Nations and anyone who supports it.

Here is the critical wording of SB 477:

That’s what leadership looks like.   A decisive decision followed by decisive action.

Don’t let the door hit you in the butt on the way out.

The insidious Agenda 21 has been using many non-governmental organizations to work at the grassroots toward forcing One-World Government on the people of many parts of the world.

Of course, as the law points out, the UN has enlisted a broad array of non-governmental and inter-governmental organizations in its effort to foist Agenda 21 on the world — most notably a Germany-based group called ICLEI, formerly known as the International Council of Local Environmental Initiatives.

But the new measure takes direct aim at that problem, too:

“the State of Alabama and all political subdivisions may not enter into any agreement, expend any sum of money, or receive funds contracting services, or giving financial aid to or from” any such entities, as defined in Agenda 21 documents.

Naturally the ninnies who think the world should be run by the United Nations and its Agenda 21 were horrified.  That thought alone makes me smile.

“It seems that Agenda 21 does actually bring people together in communities — just not in the way the U.N. had hoped for,” remarked Justice Gilpin-Green in a column for the conservative site Townhall, citing Freeman and other instrumental supporters of the effort.

“Hopefully other states can mirror Alabama’s determined nature in passing their anti-Agenda 21 legislation. It was citizen awareness and direct action that finally brought about the needed changes last week and that same awareness and action will be needed for the future of every other state.”

The People of Alabama did an amazing thing.  They did something no other jurisdiction on Earth has had the courage to do.

Every state in America should study what Alabama did, how they did it, and repeat it in their own states.

We are long overdue for ridding ourselves of Agenda 21 and all the evils it contains.