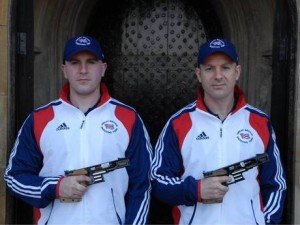 Britain’s anti-gun fanaticism means they would rather not field anyone in the  Olympic Men’s Rapid Fire Pistol event than allow two serving British soldiers to compete.  Britain’s hypocrisy is obviously at an all-time high leading up to the 2012 Olympics.

Warrant Officer Morgan Cook and Corporal Ian Jack both shot qualifying scores that would have put them on Britain’s Olympic Shooting Team but both men were told there is no place for them at London 2012.

This asinine decision has devastated and infuriated both shooters, and understandably so.

Warrant Officer Cook is currently ranked #1 in the world in the sport.  He is also the British Forces shooting champion, and had a great chance of winning a Gold medal.

“There seems to be a personal as well as a political agenda. You must wonder if there is some sort of prejudice against Army people and pistol shooters in particular,” said Cook.

There is obviously some sort of national shame over the Dunblane school massacre that makes anyone in the shooting sports a pariah.  It’s a shame to see rampant political correctness keeping two deserving shooters out of the 2012 Olympic Games.

I really don’t understand why British national guilt would require two British Army men to be punished for the crimes of a deranged lunatic 16 years ago but that is the nature of political correctness.  Punish the people who had nothing to do with the crime and demand they feel guilty for a crime they had nothing to do with.

The other day I wrote about the hypocrisy of the Australian Olympic Committee for treating two Australian swim team members like 3-year-olds for having their picture taken with a couple of guns in a gun shop, but that politically-correct lunacy pales in comparison to this British stupidity.

Cpl Jack won a major international championship in Berlin six months after taking up the sport two years ago. “Ian and I believe we both have genuine podium chances but we are being discriminated against on a technicality,” WO Cook said.

He has a copy of a scorecard signed by a coach, Hugh Hunter, which shows he had a practice score of 587 out of 600, 19 more than the mark set by British Shooting and four points higher than the Olympic record.

“It is outrageous that the British public is covering the cost of the Games yet is witnessing potential Olympic champions being denied the opportunity to compete,” he said. He called into question the qualifying criteria.

I guess we shouldn’t be surprised.

The nation that gave the world the Magna Carta has taken it’s national backbone and dumped it in the North Sea.   Britain has become, not the bastion of Freedom of its forefathers, but the greatest Nanny State on earth.