Imagine the scene.  Britain.  The 2012 Olympic Games.  The nation that spawned the documents that guaranteed all subjects of the British Empire such terrible things as Freedom of Speech.  In the wake of what’s happened in Australia this week as the world readies for the Games you could be forgiven for not realizing Australia was part of the great British Empire at one time.

How far that pitiful nation of cowards has fallen… at least if the actions of Australia’s Olympic Committee are anything we should be using to judge an entire nation.

The fuss is all over a picture that Australian Olympic swim team members Nick D’Arcy and Kenrick Monk posted to Facebook after attending a swim meet in California. 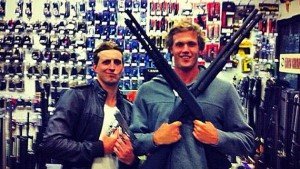 Terrible, isn’t it?  Two young men at a gun store holding a few firearms?  What were they thinking?  I mean seriously!  Holding up items that are perfectly legal inside the store that legally sells those items and taking a picture?

Forget sending them home from the Olympics early! Just take them both out back and have the Politically Correct Police shoot them both in the head!!!

Last I checked Australia still believed in Freedom of Speech, but I guess it’s been a while since I checked!  Who knew that taking pictures was such a heinous crime?

Certainly not me, and certainly not Nick D’Arcy and Kenrick Monk. Until they were both called onto the carpet to “explain themselves” to the head of Australia’s Olympic Committee, that is.

The Australian Press, ever the hypocrites themselves, described the photo and resulting action from the Olympic Committee this way:

The duo incurred the wrath of the AOC after posting photos of themselves with high-powered pistols and shotguns visiting a Californian shooting range last week after a swim meet in the US.

The AOC reacted to their poor judgement in posting the photos by announcing last Saturday that the pair would be sent home from London at the conclusion of their swimming events in London, essentially barring them from potential disruptions to still-competing athletes.

They were also banned from using social media, including Twitter, Facebook and blogging, for the Games’ period of July 16 to August 15.

Poor Judgment?  These people take themselves FAR too seriously.   They did nothing different really, than the 2007 Australian Swim Team did when they traveled to Canberra.

Pictures from that visit, including one of gold medalist Libby Trickett firing an antique pistol, were popular tabloid fodder this last weekend and led to accusations of hypocrisy for Swim Australia. Why was a team-sanctioned trip to a gun range allowed but a cheeky pose at one treated differently? 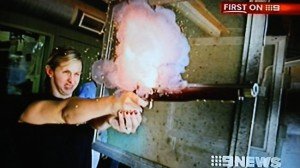 What’s even worse is the response of the two athletes in question.

Both men have caved under pressure from the Nanny State and have literally tossed their backbones onto the ash-heap of history.

Instead of standing up for themselves and explaining to the hypocrites at the Australian Olympic Committee that they haven’t done anything wrong and that the petty bureaucrats should go pound sand, the two are acting like they actually committed some heinous crime and must now pay penance.

It’s pathetic… no, it’s disgusting to listen to.

Even before the cretins at the Australian Olympic Committee issued the decree that the two were banned from using any form of social media (WHAT??) the two swimmers had already banned themselves from using social media.

“At this stage it would just serve as a distraction,” D’Arcy said of the personal ban.  “It’s really important in these last seven weeks to be really focused on training and focused on what I’m doing in pool because at end of the day I’m going to be coming up against some of the greatest swimmers in the world especially Michael Phelps.”

I guess they confused their own cowardice with expediency.   I suppose that’s to be expected when you have such luminaries as Swimming Australia President David Urquhart and CEO Kevin Neilrunning the show.

Swimming Australia told the swimmers the manner in which they posed in the photos, as well as past indiscretions which bring their actions into question.

“They showed poor judgement in posting what we saw as inappropriate photos, in which they appear to be skylarking with guns while in the US last week,” said Kevin Neil.

“While what the boys did was not illegal, posting the photos on social networks encourages public debate, and that debate can be seen to have a negative impact on the image of the sport and their own image.”

Wow.  The audacity of these two young men to “encourage public debate”!

I guess Freedom and Liberty are long forgotten notions “down under.”

That’s truly sad, because what the world really needs when this sort of political correctness gone mad rears its ugly head is for young men of character to stand up and defend themselves.  Instead these two young men have cowed themselves on an international stage for all the world to see.

Kenrick Monk said Swimming Australia agreed that the shooting range visit was a “bit of fun” but the issue was “putting up the photos”.

No, the issue is 1) politically-correct censors gone wild and 2) men of such little character that they can’t even stand up for themselves when they have done absolutely nothing wrong.

God help Australia if its next generation of leaders can be brought to their knees so easily.