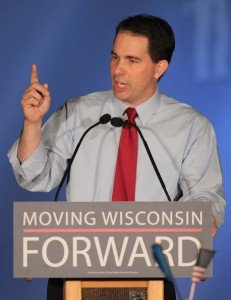 Governor Scott Walker is the first governor in American history to survive a recall vote.  While the political left will no doubt crawl back under their rocks and ignore this fact, the reality is that everyone from Obama on down did everything they could to get Walker recalled.

You see, Governor Scott Walker believes in something none of these players in the game comprehend.

Governments, like people, must live within their means.  If that means ending collective bargaining that’s become nothing more than collective extortion, so be it.  If that  means rolling back outrageous salaries and making government employees pay their fair share of entitlement programs, then Walker made it happen.

“The longer-term impact of Mr. Walker’s vindication will depend on the lesson other political leaders take from it.”
–The Wall Street Journal

To quote The National Review Online, “Scott Walker saved his job by being the adult in the room.”

The editors at the National Review weren’t shy about their thoughts on why Walker was the first governor in history to survive a recall vote.

Walker won because his reform program is popular, and because it is working. The governor’s personal approval numbers in Wisconsin hover around 50 percent — not bad for a man whom most Wisconsinites have seen Photoshopped into a Hitler mustache and Nazi regalia at least once in the last year.

But more telling is the popularity of Walker’s reforms. According to one recent Reason-Rupe poll, 72 percent of Wisconsinites favor the requirement that public-sector workers increase their pension contributions to 6 percent of their salaries. And 71 percent favor making government employees pay 12 percent instead of 6 percent of their health-care premiums.

Such commonsense measures, which put public-sector employees on a more even footing with the taxpayers who pay their salaries, have already led to over $1 billion in savings across the state, saving public-sector workers from layoffs in the bargain.

The reforms’ success has also neutralized them as campaign issues for Walker’s opponents, who were forced to turn away from the very raison d’être of the recall and emphasize instead a grab-bag of non-issues (Walker’s record on women’s rights?) and non-controversies (vague and discredited whispers about a pending Walker indictment and a secret college love child?) in the final weeks of the race.

Milwaukee mayor Tom Barrett served as less of an alternative than a vessel for Big Labor’s unmoored wrath. Barrett raised a mere $4 million on his own, while outside PACs did the heavy lifting — We Are Wisconsin raised more than $5.5 million in the last month alone, including seven-figure donations from AFSCME and the AFL-CIO, six-figure donations from the National Education Association and the American Federation of Teachers, and a mere $720 from its three (that’s three) individual donors.

The Left will complain that Walker outspent Barrett handily, but this is no vice considering Walker also handily outraised Barrett in individual donations, about three-quarters of which were for less than $50. It was Walker’s strength, after all, that convinced national Democrats to stop spending on a race they didn’t think they could win.

And, most of all, Scott Walker saved his job by being the adult in the room.

While Democrats in Washington seem to be relying on their belief that the United States government is “too big to fail” to justify a program of taxing and spending our way out of debt, the states don’t have such a luxury. And so, across the country, in states red, blue, and purple, they have turned to men like Scott Walker — and Chris Christie, and Mitch Daniels, and others — to close structural deficits, stabilize out-of-control spending, and break the death embrace between Big Labor and Big Government.

In taking this toxic partnership head on, in a state with a rich progressive history no less, Walker became its biggest target. His enemies spent a year and a half preparing to take their best shot at him. And a combined total of $100 million or so later, they missed. They missed because voters are starting to understand that governing through crisis requires someone willing to make unpopular choices, stand up to entrenched interests, and hold the line against loud and determined opposition.

It’s great to see a politician who does what he says he will do.  Unlike Obama, Scott Walker represents real hope and change for American families.  Walker will force Wisconsin to live within its means, which is precisely why Big Labor, wanted him removed.  Their continued stranglehold on American prosperity depends upon being able to spend our great grandchildren’s inheritance, something Walker isn’t willing to do.

Thank God for a little common sense in Wisconsin.  Now it’s time for the same common sense to invade the White House this November.

We’ve had about as much of Obama’s “hope and change” as we can stand.  If America is to survive, it’s time for the federal government to do what Wisconsin is doing under Scott Walker: living within its means, not spending our great grandchildren’s inheritance.