Common sense.  It’s such a simple thing but it’s in such short supply in our world, isn’t it?

The latest case of gross human stupidity to show up on my radar is that of  Texas Judge Lanny Moriarty, who felt the petty and pathetic need to make an example of grade 11 Texas honour student Diane Tran.

If you haven’t heard of her before, prepare yourself to be horrified. 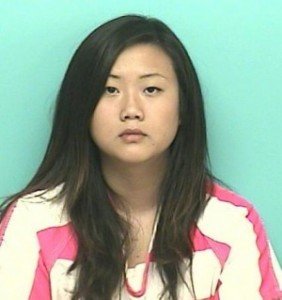 Diane Tran is, as I said, a 17-year-old honours student at Willis High School, which is just outside of Houston, Texas.  After her parents separated and her mother moved away Diane took two jobs: one full-time at a dry-cleaning business and the other job is working part-time for a wedding planner.  She supports her brother and sister financially and only sees her father infrequently since he works in Houston all week.

It’s hard not to see why Diane would have missed some school.  Working two jobs to support yourself and your 2 siblings means something has to give, and that something in Diane’s case is NOT her grades but merely the amount of time her behind is in a chair in a classroom.

It is abundantly clear to me that Judge Lanny Moriarty has his head firmly planted up his own behind.  Were he able to pull it out of that suffocating and odious environment for just a minute he would be able to discern what is actually important in school.  The frighteningly moronic judge believes it is the amount of time your behind is planted in a chair in a classroom that is of greatest importance, not the grades one is getting.

That Diane Tran is an honours student while doing everything else she is doing to support her siblings tells me that she comprehends very clearly the importance of a good education.  She has obviously done her best to balance classroom time with her other commitments but refuses to let her grades fall, no matter what.

Judge Moriarty told KHOU 11 News that he intended to make an example of Tran by placing her in jail.

“If you let one run loose, what are you going to do with the rest of them? Let them go, too?” Moriarty told the station.

What does sending a 17-year-old honours student to jail for 24 hours accomplish?   Is this really the kind of student we want to make an example of?

Does this send the correct message to students?

Absolutely not.  By punishing a student like Diane Tran who is doing all the right things we tell all the other Diane Trans of the world that their good choices are actually bad choices.

That is nothing short of ridiculous.

Public outcry over the stupidity of Judge Lanny Moriarty’s punishment of Tran so incensed the online world that within a week that $100,000 had been raised in support of Tran and her family.

That public outcry also caused the moronic judge to reverse his asinine decision and drop the charges against Diane Tran.

Precinct 1 Justice of the Peace Lanny Moriarty, at the Montgomery County District Attorney’s request, signed an order that vacates the contempt of court conviction that sent Diane Tran to jail last week.

The decision clears the way for the issue to be expunged from her record.

The action was taken, in part, after Moriarty looked at the extenuating circumstances that had resulted in Tran missing school and because her court summons had failed to notify her of her right to an attorney or to have one appointed for her, officials said.

It’s a good thing that judges are elected in the United States.  Here in Canada I have no doubt that all these protests would have fallen on the deaf ears of an unelected and unaccountable judge who would believe following the rules is far more important than doing the right thing.

While I’m very glad that Judge Lanny Moriarty finally came to his senses, albeit not until a massive public outcry got his attention, I do hope the good folks of Precinct 1 elect someone else to his position in the next election.

Now THAT is a message that should be sent.