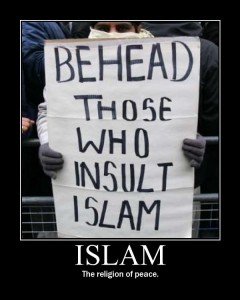 Islam, the Religion of Peace, is at it again in Pakistan.  This time radical islamic murderers have killed two children by tossing acid into their faces and then dousing their bodies in it.  Their crime? Being friends was the crime punishable by death by acid burn.

How civilized.  How… peaceful and loving of them.

It’s a horrific way to die, yet for proponents of the Religion of Peace it’s just business as usual… terrifying the population into capitulating to the will of thugs and murderers.

It’s not that there weren’t witnesses to the heinous murder of a 12-year-old girl and a 15-year-old boy… there were.  They’re just too terrified to say who killed the children.

Even worse, the parents of the slain teenagers are too terrified to even claim their bodies from the hospital morgue and give them a decent burial.

The police chief said officers were investigating the motive for the attack, but witnesses who found the bodies told AFP the two were probably killed because of their friendship.

No one has claimed the bodies, which are still in Ghazni hospital, police said.

What will ultimately happen to the bodies of these two children remains to be seen, but I’m not holding my breath in hopes that these murderers will be brought to justice.

The Taliban of Afghanistan and their radical Islamic followers believe that tossing vats of acid into the faces of young men and women is justified for those who manage to raise their ire.

GHAZNI — A 12-year-old girl and a 15-year-old boy have been killed in an acid attack in Afghanistan, an official said Saturday, with witnesses claiming it was because of their friendship in what is an ultra-conservative country.

The bodies were discovered on Friday in wasteland in the Esfandi area of Ghazni province in south central Afghanistan, provincial police chief Zorawar Zahid told AFP.

“Their bodies and faces were burnt by acid,” he said.

Their goal is not compliance with some Islamic law, no matter what these people say.  Their goal is terror, pure and simple.  These animals will stoop to any loathsome act in order to perpetuate their evil ways.

To say these people need to be fought each and every step of the way is the grossest understatement I can imagine.

Islamic cowards tossing acid into the faces of 12-year-old girls do not deserve my compassion or my understanding.  They deserve something far worse.  Perhaps a vat of their own acid cast into their faces, for example, might be a just reward.