Memorial Day Is NOT on Sale

Millions of Patriots Have Already Paid the Full Price

“I am well aware of the toil and blood and treasure that it will cost to maintain this Declaration, and support and defend these States.” –John Adams 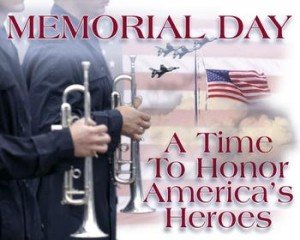 Amid the sparse, reverent observances of the sacrifices made by millions of American Patriots who paid the full price for Liberty1, in keeping with their sacred oaths2, we are inundated at every turn with the commercialization of Memorial Day by vendors who are too ignorant and/or selfish to honor this day in accordance with its purpose.

Indeed, Memorial Day has been sold out, along with Washington’s Birthday, Independence Day, Veterans, Thanksgiving and Christmas Days. And it’s no wonder, as government schools no longer teach civics or any meaningful history, and courts have excluded God (officially) from the public square.

“War is an ugly thing, but not the ugliest of things; the decayed and degraded state of moral and patriotic feeling which thinks nothing worth a war, is worse. A man who has nothing which he cares more about than he does about his personal safety is a miserable creature who has no chance at being free, unless made and kept so by the exertions of better men than himself.”

It is that “decayed and degraded state of moral and patriotic feeling” which accounts for why so many “miserable creatures” have downgraded Memorial Day to nothing more than a date to exploit for commercial greed and avarice.

While units large and small of America’s Armed Forces stand in harm’s way around the globe, many Americans are too preoccupied with beer, barbecue and baseball to pause and recognize the priceless burden borne by generations of our uniformed Patriots. Likewise, many politicos will use Memorial Day as a soapbox to feign Patriotism, while in reality they are in constant violation of their oaths to our Constitution.

That notwithstanding, there are still tens of millions of genuine American Patriots3 who will set aside the last Monday in May to honor all those fallen Soldiers, Sailors, Airmen, Marines and Coastguardsmen who have refreshed the Tree of Liberty with their blood, indeed with their lives, so that we might remain the proud and free. My family, which humbly descends from generations of American Patriots from the American Revolution forward, will honor the service and sacrifice of our nation’s fallen warriors by offering prayer in thanksgiving for the legacy of Liberty they have bequeathed to us, and by participating in respectful commemorations.

Since the opening salvos of the American Revolution, nearly 1.2 million American Patriots have died in defense of Liberty. Additionally, 1.4 million have been wounded in combat, and tens of millions more have served honorably, surviving without physical wounds. These numbers, of course, offer no reckoning of the inestimable value of their service or the sacrifices borne by their families, but we do know that the value of Liberty extended to their posterity — to us — is priceless.

Who were these brave souls?

On 12 May 1962, Gen. Douglas MacArthur addressed the cadets at the U.S. Military Academy, delivering his farewell speech, “Duty, Honor and Country4.” He described the legions of uniformed American Patriots as follows: “Their story is known to all of you. It is the story of the American man at arms. My estimate of him was formed on the battlefields many, many years ago and has never changed. I regarded him then, as I regard him now, as one of the world’s noblest figures — not only as one of the finest military characters, but also as one of the most stainless.”

His name and fame are the birthright of every American citizen. In his youth and strength, his love and loyalty, he gave all that mortality can give. He needs no eulogy from me, or from any other man. He has written his own history and written it in red on his enemy’s breast.

But when I think of his patience under adversity, of his courage under fire, and of his modesty in victory, I am filled with an emotion of admiration I cannot put into words. He belongs to history as furnishing one of the greatest examples of successful patriotism. He belongs to posterity as the instructor of future generations in the principles of liberty and freedom. He belongs to the present, to us, by his virtues and by his achievements.

In twenty campaigns, on a hundred battlefields, around a thousand campfires, I have witnessed that enduring fortitude, that patriotic self-abnegation, and that invincible determination which have carved his statue in the hearts of his people.

From one end of the world to the other, he has drained deep the chalice of courage. As I listened to those songs of the glee club, in memory’s eye I could see those staggering columns of the First World War, bending under soggy packs on many a weary march, from dripping dusk to drizzling dawn, slogging ankle deep through mire of shell-pocked roads; to form grimly for the attack, blue-lipped, covered with sludge and mud, chilled by the wind and rain, driving home to their objective, and for many, to the judgment seat of God.

I do not know the dignity of their birth, but I do know the glory of their death. They died unquestioning, uncomplaining, with faith in their hearts, and on their lips the hope that we would go on to victory. Always for them: Duty, Honor, Country. Always their blood, and sweat, and tears, as they saw the way and the light.

Duty. Honor. Country — these are not for bargain sale or discount.

On Memorial Day of 1982, President Ronald Reagan5 offered these words in honor of Patriots interred at Arlington National Cemetery6: “I have no illusions about what little I can add now to the silent testimony of those who gave their lives willingly for their country. Words are even more feeble on this Memorial Day, for the sight before us is that of a strong and good nation that stands in silence and remembers those who were loved and who, in return, loved their countrymen enough to die for them. Yet, we must try to honor them not for their sakes alone, but for our own. And if words cannot repay the debt we owe these men, surely with our actions we must strive to keep faith with them and with the vision that led them to battle and to final sacrifice.”

Our first obligation to them and ourselves is plain enough: The United States and the freedom for which it stands, the freedom for which they died, must endure and prosper. Their lives remind us that freedom is not bought cheaply. It has a cost; it imposes a burden. And just as they whom we commemorate were willing to sacrifice, so too must we — in a less final, less heroic way — be willing to give of ourselves.

It is this, beyond the controversy and the congressional debate, beyond the blizzard of budget numbers and the complexity of modern weapons systems, that motivates us in our search for security and peace. … The willingness of some to give their lives so that others might live never fails to evoke in us a sense of wonder and mystery.

One gets that feeling here on this hallowed ground, and I have known that same poignant feeling as I looked out across the rows of white crosses and Stars of David in Europe, in the Philippines, and the military cemeteries here in our own land. Each one marks the resting place of an American hero and, in my lifetime, the heroes of World War I, the Doughboys, the GIs of World War II or Korea or Vietnam. They span several generations of young Americans, all different and yet all alike, like the markers above their resting places, all alike in a truly meaningful way.

As we honor their memory today, let us pledge that their lives, their sacrifices, their valor shall be justified and remembered for as long as God gives life to this nation. … I can’t claim to know the words of all the national anthems in the world, but I don’t know of any other that ends with a question and a challenge as ours does: “O! say does that Star-Spangled Banner yet wave, O’er the land of the free and the home of the brave?” That is what we must all ask.

Indeed, in this era when Liberty is being crushed under the weight of Democratic Socialism7, Patriots must all ask that question, and act accordingly.

For the Fallen, we are certain of that which is noted on all Marine Corps Honorable Discharge orders: “Fideli Certa Merces” — to the faithful there is certain reward.

Thomas Jefferson offered this enduring advice to all generations of Patriots: “Honor, justice, and humanity, forbid us tamely to surrender that freedom which we received from our gallant ancestors, and which our innocent posterity have a right to receive from us. We cannot endure the infamy and guilt of resigning succeeding generations to that wretchedness which inevitably awaits them if we basely entail hereditary bondage on them.”

We owe a great debt of gratitude to all those generations who have passed the Torch of Liberty to succeeding generations. In accordance, I humbly ask that each of you call upon all those around you to observe Memorial Day with reverence.

To prepare hearts and minds for Memorial Day, take a moment and read about the Tomb of the Unknown Soldier8. Join with other Patriots across the nation who will be placing flags at headstones in your local military cemetery (generally the Saturday prior to Memorial Day).

I invite you to view these tributes to our Armed Forces9 and to God and Country10 at the Patriot YouTube Channel11.

In honor of American Patriots who have died in defense of our great nation, lower your flag to half-staff from sunrise to 1200 on Monday. (Read about proper flag etiquette and protocol12.) Join us by observing a time of silence at 1500 (your local time), for remembrance and prayer. Offer a personal word of gratitude and comfort to any surviving family members you know who are grieving for a beloved warrior fallen in battle.

On this and every day, please pray for our Patriot Armed Forces now standing in harm’s way around the world in defense of our liberty, and for the families awaiting their safe return.