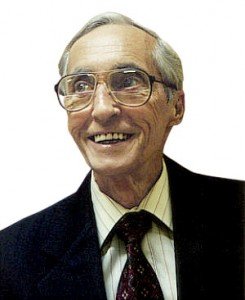 I’ve been a devout fan and student of Henry Lamb from the minute I came across his columns over 10 years ago on Enter Stage Right which has a permanent home on my Book Bar alongside other carriers of Lamb’s valuable collection.

Although a long-time disciple, I knew little about the writer and author personally except that he has dedicated many years to educating the public about the evils of such things as Agenda 21–Agenda for the 21st Century–the United Nations, (UN) Sustainable Development, Smart Growth, Maurice Strong…

Recently, I was browsing the Oathkeepers website where I came across the heading “Henry Lamb on Maurice Strong, UN, Bilderberg, Agenda 21” with an introduction by Elias Alias.

I no doubt had read the 1997 piece, but there’s nothing like a refresher course on the litany of evils cleverly perpetrated on the unsuspecting public by the Prophet of Doom.

I wasn’t too far into Elias Alias’ introduction when I was dumb-struck by the unexpected:

“A friend in Montana known as ‘Lark’ sent to my inbox the notice of the passing of Henry Lamb. In clicking around about Henry Lamb’s death I came across a remarkable work he wrote in 1997, and I’m sure it belongs on the pages of Oath Keepers national.”

It was through Elias Alias’ subtle notice that I initially learned that freedom-loving people of the world had lost a unique and intellectual friend.

I read ”Henry Lamb on Maurice Strong”–as should everybody–saved it to my Special UN Articles file, then went clicking for additional information about the 74-year-old gentleman’s May 24th death.

Information was sparse but I did find a brief write-up by Editor Judi McLeod of Canada Free Press where I used to find Henry Lamb’s columns gracing the screen.

“News comes to Canada Free Press (CFP) this morning from columnist Michael Oberndorf of the passing of outstanding American patriot, Henry Lamb,” wrote McLeod in her perfectly-titled tribute:.“Henry Lamb: Death of a Patriot”

“One of a kind Tennessean Henry Lamb held a lifelong dedication to the American Constitution, and did more to warn average people about the destructive encroachment of the United Nations on human society than any other source.”

World Net Daily (WND), where Lamb had been a columnist since 1999, posted an In Memoriam eulogy with the very fitting subhead: “Globalism Expert Was Vociferous Defender of Constitution, U.S. Sovereignty”.

“Henry Lamb was a stalwart champion of constitutional values and national sovereignty,” stated WND commentary editor Ron Strom. “He educated countless Americans about globalist schemes and threats to personal property rights. Henry was inspirational for both his fortitude and his graciousness.”

The eulogy goes on to say that “Lamb was the founding chairman of Sovereignty International and the founding CEO of the Environmental Conservation Organization, as well as founder of Freedom21 Inc.”

Ironically, I see nothing on those three websites about Lamb’s passing.

In a testimonial made prior to Lamb’s death another one of my inspirations, Tom DeWeese, president of the American Policy Center, was quoted as saying:

“Without question, Henry Lamb is the foremost expert in the nation on the subject of the U.N.’s drive for global governance and its blueprint called Agenda 21. In the mid-1990s, his articles first taught me of the dangers we faced. Most of what Henry warned about then is now taking place.”

My own article Sustainability and a Free Society Are Not Compatible, posted January 30, 2012 on ChristopherdiArmani.com, was inspired by both DeWeese and Lamb:

“The goal of sustainable development is to transform the world into a feudal-like governance by making nature the central organizing principle for our economy and society, explains Tom DeWeese, president of the Virginia-based American Policy Center.

“He advises that the international agenda has been set in motion, beginning with the United Nations’ treaties and agreements.

“ ‘That agenda is now working its way down through federal to state to local government policy,’ DeWeese added.

“ ‘It is now the official policy of the United States government; and every single city, town and small burg in this nation is working on plans to implement it.’

“There are no exceptions in DeWeese’s country nor in Canada.

“Sustainable development is an odious concept that does not recognize constitutional rights nor property rights in any country.

“One sage suggestion as to how society can start zapping this freedom-sucking pestilence came from journalist Henry Lamb, chair of Sovereignty International.

“All political candidates should be asked publicly before every election to state his/her commitment to a ‘free society’ or to a ‘sustainable society’.

“It cannot be both ways, he asserted.

“Sustainability and a free society simply are not compatible.”

May your soul rest in peace, Henry Lamb.

And thank you for the leaving a great legacy of wisdom that others can draw on for many years to come in their attempt to carry on your work of successfully thwarting this apocalyptic scourge that has descended upon humanity.

You rang the bells loudly to warn us against Marxist scum, the likes of Harvey Rubin, vice-chair of International Committee for Local Environmental Initiatives (ICLEI) for implementing UN Agenda 21 in American local communities, who declared: “Individual rights must take a back-seat to the collective.”