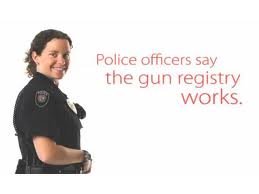 It should be a simple matter for police to see who was issued an ATT for the corner of Prince Arthur and Saint-Dominique streets and then go arrest the culprit or culprits.

You say that police never issued an ATT for downtown Montreal for Sunday morning?

How is that possible?

Clearly someone must have issued the ATT otherwise these handgun owners would never have been allowed to take their handguns downtown!

You mean to tell me that the police have no idea who took a handgun onto the streets of Montreal and shot an innocent woman?

I don’t understand…  Montreal’s Chief of Police (and all the other chiefs of police across Canada) assured us that the gun registry was required to keep guns out of the hands of criminals, that the safety of Canadians demanded a gun registry!  Clearly 80 years of handgun registration must be good for something, right?

Umm… no, actually it’s not.  The only thing a gun registry is good for is bloating police budgets and keeping bureaucrats busy shuffling stacks and stacks of useless paper from one side of their desks to the other.

I know… I know…  It’s a shock to those progressive thinkers among us… but the fact of the matter is that gun laws only affect law-abiding gun owners.

Criminals like the ones who shot a woman on the streets of Montreal this Sunday morning have not and will never be subjected to our stupid and useless gun registry.

Woman hit by stray bullet on the Plateau

A 25-year-old woman is recovering from a gunshot wound after she was hit by a stray bullet fired into a crowd on the Plateau early Sunday morning.

Montreal police said the shooting happened at around 3:30 a.m. at the intersection of Prince Arthur and Saint-Dominique streets.

“There are two suspects who fired at least one bullet in the area when the street was crowded,” said Const. Simon Delorme.

The victim was struck in the ankle, police said.

The two male suspects took off in a vehicle.

The woman was taken to hospital for treatment, but her injuries are believed to be minor, police said.