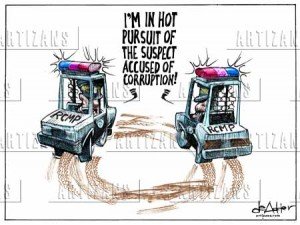 Constable Lee Douglas must be thinking it’s great to be a cop in Oshawa, Ontario… He [allegedly] broke the law and is now being rewarded for his thievery with a paid vacation.  What other career gives benefits like that?

Any normal business would fire an employee for theft or at least make it clear they will resign or face criminal charges, but not police forces in Canada.

Nope, here we prefer to reward thieving cops like Constable Douglas with a paid vacation until such time as they come to trial.  Sure, police forces call it a suspension, but they still pay him his full salary while he sits on his behind and ponders what he will do once he’s back on the job.

Constable Douglas’ criminal charge stem from a case about 5 years ago, where a family member passed away.  That family member owned a shotgun at the time of his death, so the family contacted police to have it disposed of.

Constable Lee Douglas was the policeman who took possession of the shotgun.  Only instead of taking it to the police station to be destroyed, he kept it for himself.

Ironically, if it weren’t for police efforts to crack down on those “evil, horrid gun owners” who let their firearms licenses expire (gasp!) Constable Lee Douglas would have gotten away with it.

It was only after police contacted the family in an attempt to find the man whose license had expired that they discovered not only had the man died 5 years previously, but they had contacted police and surrendered the shotgun at that time.

It’s not just thieving cops that we keep on the payroll for years, either.  RCMP Corporal Monty Robinson is STILL on the RCMP’s payroll 3 years after being suspended for killing Orion Hutchinson while driving drunk.  He was in such a hurry to run home for a couple more shots of vodka that he couldn’t even bother to check and see if the man he plowed into was still alive.

Orion Hutchinson died at the scene.  Robinson then proceeded to do everything in his power to obstruct the investigation into his atrocious actions.  He is a complete and utter disgrace to every person who has ever worn the RCMP uniform, and that disgrace is not over yet.

Robinson is STILL on the RCMP payroll today.

The RCMP recently announced they were finally seeking to have Robinson’s pay suspended in the wake of his conviction for obstructing justice in Orion Hutchinson case.  He has never been charged with killing the young man and likely never will face charges for that.

RCMP Commissioner Bob Paulson, speaking about another RCMP disgrace by the name of Staff Sgt. Donald Ray, said he was seeking changes to the RCMP’s disciplinary system.

Those changes can’t come too soon, in my opinion. The RCMP was once a respected police force but the days of respect and reverence are long, long gone.  Respect for the RCMP has been shattered, little by little, by the actions of men like Donald Ray and Monty Robinson, just to name two.

I could add more to that list but to do that task justice I’d have to be typing for quite a while.