According to Wikipedia, the first Everybody Draw Mohammed Day was held on May 20, 2010 in support of free speech and freedom of artistic expression of those threatened by violence for drawing representations of the Islamic Prophet Muhammad.

It began as a protest against censorship of an American television show, South Park, “201” by its distributor, Comedy Central, in response to death threats against some of those responsible for two segments broadcast in April 2010.

Observance of the day began with a drawing posted on the Internet on April 20, 2010, accompanied by text suggesting that “everybody” create a drawing representing Muhammad, on May 20, 2010, as a protest against efforts to limit freedom of speech. 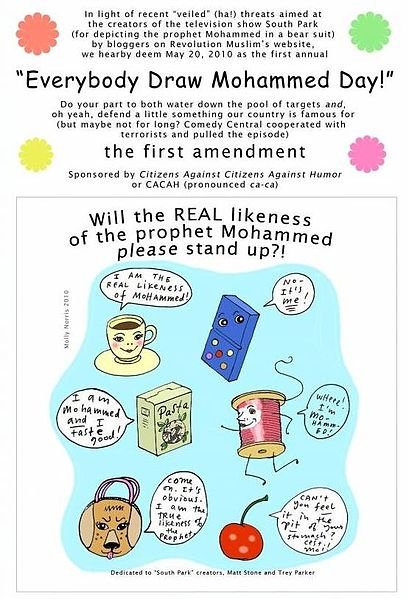 U.S. cartoonist Molly Norris of Seattle, Washington, created the artwork in reaction to Internet death threats that had been made against cartoonists Trey Parker and Matt Stone for depicting Muhammad in an episode of South Park. Depictions of Muhammad are explicitly forbidden by a few hadiths (sayings of and about Muhammad), though not by the Qur’an.

Postings on RevolutionMuslim.com (under the pen name Abu Talha al-Amrikee; later identified as Zachary Adam Chesser) had said that Parker and Stone could wind up like Theo van Gogh, a Dutch filmmaker who was shot to death.

Here in Canada Ezra Levant’s magazine Western Standard was essentially bankrupted by a human rights complaint filed by a radical Imam after Levant published Danish cartoons depicting Mohammed.  Those cartoons had caused riots across parts of Europe and Levant wanted to show Canadians what all the fuss was about.

While the Human Rights Tribunal against Levant was ultimately dropped, the 3-year ordeal drained Levant’s and Western Standard‘s finances past the point of no return.

Molly Norris said that if people draw pictures of Muhammad, Islamic terrorists would not be able to murder them all, and threats to do so would become unrealistic. Within a week, Norris’ idea became popular on Facebook, was supported by numerous bloggers, and generated coverage on the blog websites of major U.S. newspapers. As the publicity mounted, Norris and the man who created the first Facebook page promoting the May 20 event disassociated themselves from it. Nonetheless, planning for the protest continued with others “taking up the cause”.

Facebook had an “Everybody Draw Mohammed Day” page, which grew to over 100,000 participants (101,870 members by May 20). A protest page on Facebook against the initiative, named “Against ‘Everybody Draw Mohammed Day'”, attracted slightly more supporters (106,000 by May 20). Subsequently, Facebook was temporarily blocked by Pakistan; the ban was lifted after Facebook agreed to block the page for users in India and Pakistan.

In the media, Everybody Draw Mohammed Day attracted both support from commentators who felt that the campaign represented important issues of freedom of speech, and the need to stand up for this freedom, as well as criticism from other commentators who found the initiative crass, juvenile, and needlessly offensive.