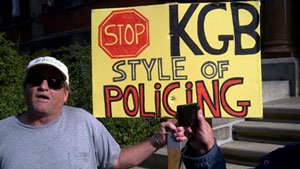 Whether or not a person is annoying is not just cause for them to be harassed by police, yet that is exactly what is happening to Fredericton blogger Charles LeBlanc.

Charles LeBlanc is, by many accounts, an annoying blogger.  He has been called rude and  belligerent as well as names that are for worse on many occasions.  His blog posts are often rambling pieces that are hard to follow.

All that aside, Charles performs a valuable service to the community.

That service?  Pointing out the truth about politics, both city and provincial, in the province’s capital.  He also shines the light on how police treat the less fortunate citizens of Fredericton.

Leblanc is on welfare, as far as I can discern.  He’s got some issues, but hey, name me a person on this planet that doesn’t and I’ll buy them a hero ring!

While he seems unable to hold down a job, LeBlanc’s passion and ability to bring issues to light in Fredericton are nothing short of amazing.

Charles LeBlanc roams the streets all hours of the day and night.  He often videotapes police interacting with citizens, and sometimes, well, let’s just say the police aren’t acting in the best possible manner in some cases.

Charles blogged about it and, apparently posted the video on YouTube.  That caused no end of grief for the Fredericton Police Force, and rightfully so.  Since then the FPF appear to be on mission to “get” The Blogger, the name Charles uses for himself.

New Brunswick resident Lawrence Manzer has an excellent timeline of events for LeBlanc’s problems with police, in which he asked the question “Is it Time that Fredericton Police Chief Barry McKnight Resigns?”

I would suggest the answer to that question is “Yes.”

Members of the police are public servants.  As such, the public has a right to protest when the police act undignified or worse, as in the case where they beat the crap out of a Canadian soldier.  Even welfare recipients who blog are citizens, a fact that obviously is lost on the Fredericton Police Force and Chief McKnight.

Here’s a tip.  If you don’t want people protesting outside the police station, try acting in a manner worthy of respect.  It’s just a thought…

Recently Fredericton City Police arrested Charles and charged him with criminal libel against one of its own police constables.  They raided Charles LeBlanc’s apartment with no less than 8 police constables, ransacked his home and seized all his computer equipment as “evidence” in the case.

It’s ridiculous, of course.  Charles no doubt wasn’t kind in his characterization of the FPF constable who claimed to be libeled, but perhaps that constable ought to look at the content of his own character before using the might of the State to crush someone for the crime of exercising their Right to Freedom of Speech.

I write unflattering things about specific police constables all the time.  Those unflattering remarks have been earned by every one of those constables.  If they hadn’t acted in the atrocious ways they did, I wouldn’t be writing about them. It’s pretty simple.  The same is true of LeBlanc.

The part of the Criminal Code of Canada that they charged LeBlanc under has been declared unconstitutional in many provinces already.  Not wanting the same fate in New Brunswick, Crown prosecutors wisely refused to move forward with the charge.  It probably didn’t help that New Brunswick Attorney General Marie-Claude Blais is considering a public inquiry into why the FPF went after LeBlanc with such vengeance.

Now that the Fredericton City Police has been forced to give Charles back the computer equipment they seized when they raided his home on the libel charge, I guess they’re not very happy and felt the need to “get” their man using any means necessary.

If you recall Bureaucrats Rule #1, (the rules are more important than people) police are technically correct in their arrest of Charles LeBlanc for violating his Provincial Legislature ban.

To take this position to its logical extreme, the Nazis were technically correct in wiping out 6 million Jews during World War II, since the laws of Germany at the time said it was legal.

In a similar but much less extreme example of using placing more importance on what’s “legal” than one simple right and wrong, Charles LeBlanc will now go back before a judge.

Just a couple of weeks after the crown refused to pursue criminal libel charges against him, a controversial Fredericton blogger has been arrested. Police confirm a man was arrested over the noon hour Wednesday for trespassing outside the legislature. Witnesses say it was Charles LeBlanc, who has been under a no-trespass order at the legislature for several years. Despite that order, officials have – for the most part – allowed him on the grounds to conduct interviews with politicians. It’s not known what prompted the change of heart Wednesday.

Oh, sure it is.  Spite.  Pure and simple spite.  CapitalFM can’t say that on the radio, or at least they think they can’t.

The case of Charles LeBlanc and the Fredericton Police Force has abuse of power written all over it.  Even the government is willing to admit that by its willingness to open an inquiry into his case.

The only people who believe they are doing the right and proper thing are, of course, the fine folks at the Fredericton Police Force and its Chief, Barry McKnight.

It would seem time for McKnight and his boys to go back to kindergarten and re-learn the lessons of right and wrong.  They’re really simple, and have nothing to do with legal mumbo jumbo to justify their atrocious actions.

McKnight won’t resign though.  He can’t even comprehend that what he is doing is wrong.  That’s the real shame and not just for him and LeBlanc.  It’s a shame for the people of Fredericton, New Brunswick, who have to live with the fact their chief of police is making them the laughing stock of the nation.

Is one lone blogger who lives on welfare really that big of a threat?