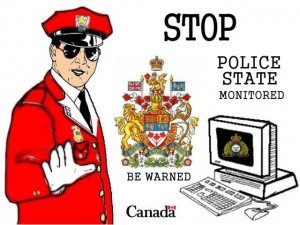 When the Police choose which laws they will obey, what do you have?

This question has come up this week in the wake of the refusal of at least 5 provincial Chief Firearms Officers across Canada to obey the law of the land as expressed by the passage of Bill C-19.

As most already know, Bill C-19 struck down the requirements for people to register their non-restricted firearms.  Ontario’s Chief Firearms Officer is leading the pack in declaring Bill C-19 null and void and that they (the CFOs) will interpret Section 58 of the Firearms Act to mean whatever they want.

Section 58.1 of the Firearms Act reads as follows:

The Ontario CFO is interpreting this section of the Firearms Act to mean he can impose any condition he wants to a Business Firearms License.  After all, as CFO, he is the one who gets to decide what “reasonable” means. The fact that this “reasonable” condition is in direct conflict with Bill C-19 is entirely beside the point.  At least as far as the Ontario CFO is concerned, anyway.

“What do you call a state where the police refuse to obey the laws of the land, and instead attempt to make up the law themselves? Here’s a hint, we swear every November 11th, ‘Lest we forget, Never again!’”

Public Safety Minister Vic Toews made it very clear that the law no longer requires the registration of non-restricted firearms, and that forcing gun owners to provide this information
is illegal.

It has been suggested in various media reports that Chief Firearms Officers, acting pursuant to their purported authority under the Firearms Act, are attempting to collect point of sale data that they are no longer authorized to collect pursuant to Bill C-19. To be clear, the Firearms Act neither authorizes this activity, nor any other measures that could facilitate the creation of a provincial long-gun registry.

“Our response would be business as usual,” said Ontario Provincial Police Acting Insp. Steve Rideout, a spokesman for Ontario’s CFO. “We’ll wait and see what position the RCMP takes on Mr. Toews’ direction and then we’ll consider our options.”

In a nation that places an emphasis on law and order, this is completely unacceptable. Police do not get to make up laws to suit their own agenda. Parliament makes laws and the police are to uphold them.  Clearly Ontario Provincial Police Acting Insp. Steve Rideout believes he knows better than Parliament what laws should be.

Welcome to the new Police State, courtesy of the OPP and acting Inspector Steve Rideout.

“Accordingly, as the Commissioner of Firearms, pursuant to the direction issued by the Minister of Public Safety on May 8, 2012, I instruct all Chief Firearms Officers to ensure that the licensing conditions you impose on business records pursuant to the Firearms Act do not facilitate the creation of long-gun registries in your jurisdictions.“

From where I stand the first option OPP Commissioner Chris Lewis should consider is firing acting Inspector Steve Rideout and appointing someone to the position of CFO that can actually take direction from Parliament.