William Swinimer’s story shocks me, not because I can’t believe it happened, but because of how the vice-principal of Forest Heights Community School in Chester Basin, N.S. characterized William’s T-shirt.

The moronic school bureaucrat called the T-shirt offensive and was nothing more than “hate talk.”

The language on this so-called “offensive” T-shirt?

“Life is Wasted Without Jesus”

Yeah, that just screams of hatred, doesn’t it? 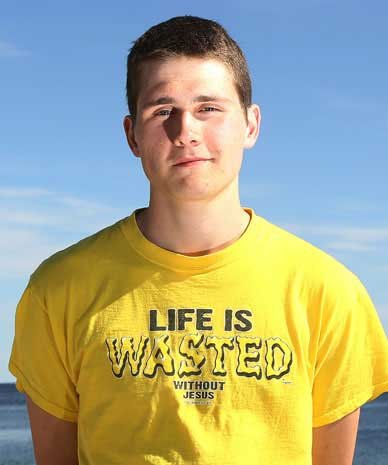 I guess he should have worn a T-shirt promoting one of the “approved” religions, although the vice-principal didn’t seem willing to identify which religions would be okay to have on a T-shirt.

That said, I can’t imagine any student would have been suspended from school for 5 days if they had, for example, worn a T-shirt that said “Life is wasted without Allah.”  No, the school would never have dared attack a Muslim student in this fashion.

Interestingly, the school’s Staff List has been removed from the school’s website.  A web search shows that it existed at http://www.fhcs.ednet.ns.ca/about-us/staff-list/ until recently but has since been taken down.

I guess the vice-principal is willing to issue a suspension for wearing a T-shirt but the he or she is too cowardly to stand up and express his or her rationale for it.  Even worse, the school board is protecting this yahoo by removing the staff list from the internet.

What I do love about Willian Swinimer is his response to the stupid edict of the so-far unnamed and protected vice-principal.

Do you think this bureaucritter will have the backbone to carry out his or her threat to suspend William for the rest of the school year for wearing his Jesus shirt again?

If the comments of South Shore Regional School Board superintendant Nancy Pynch-Worthylake are anything to go by, they probably will.

“I know it’s out there that somehow we don’t allow religious beliefs in school, which is absolutely false,” Pynch-Worthylake said.

“The only time is when we have students come forward and say ‘I really feel this is a criticism of my beliefs’ and that’s what happened in this situation.”

Aren’t we getting just a mite too thin-skinned about this?  Not according to Ms. Pynch-Worthylake.

“In meeting with students, we would ask ‘Is it blatantly offensive? And in this case it was ‘No.’ Is it obvious that someone would be silly to think it’s offensive? Well no — we can kind of see both [sides],” she said. “And then in meeting and talking with students we would say ‘The easy way to deal with this respectfully would be to just wear a different shirt.’”

In standing up for his Rights to Freedom of Speech and Freedom of Religion, William Swinimer’s refusal to take off his T-shirt was construed as “defiance” and what’s worse, “repeated defiance” and that’s why he was suspended.

School should be a place where all points of view can be expressed, where learning to accept each other’s religious viewpoints is encouraged, not bludgeoned into submission because some poor little oaf might be offended.

Standing up for one’s Rights and Freedoms should be commended, not punished.  Clearly this school district has other ideas.

Contrary to the Human Rights Commissions edicts there is no “Human Right NOT to be Offended.”  Being offended is part of life.  It happens every day.  Instead of trying to protect every person from ever being offended, shouldn’t we be teaching people, especially high-school students, that tolerance is a good thing?

Oops, I forgot.  Tolerance applies ONLY to Christians.  Only Christians are expected to be tolerant of everyone else’s religion… but are never afforded that same courtesy in return.

It’s clearly okay to bully a Christian student about his faith, but can you imagine if this case revolved around a Muslim student?

Nope, me neither.  That would simply never happen.

After being placed under the media spotlight the cowardly school bureaucrats responded just like a cockroach when the lights are turned on.  They scurried for cover anywhere they could find it.

On May 4, 2012 the South Shore Regional School Board reversed its asinine decision and will now allow William Swinimer to wear his “Life is Wasted Without Jesus” T-shirt when he returns to school.

So far as I can tell nobody has had the intestinal fortitude to actually apologize to William for being suspended for a week from school.