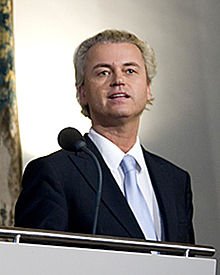 If you have never heard of Geert Wilders then I urge you to watch this brief video and learn about the man who has sacrificed his personal freedom by speaking out against the threat of radical Islam.

Wilders has been elected to the Dutch Parliament as the founder and leader of the political party Partij voor de Vrijheid or Party for Freedom for the past 8 years and is unwavering in his fight to rid his country of the threat of radical Islam.

He has been taken to court repeatedly for his public comments on Islam and has been cleared of all hate speech charges.  Those court battles have been massive victories for the Right to Freedom of Speech in The Netherlands and have made him a lightning rod for the lunatic left’s assault on freedom both in that country and around the world.

Wilders has just written his autobiography (with a forward by Mark Steyn) called “Marked for Death: Islam’s War Against the West and Me” that highlights what he has gone through as a result of speaking out publicly against Islam.  He now lives under 24-hour police protection because of all the death threats he receives.

Geert Wilders is living proof that exercising our Rights and Freedoms often comes at an extremely high price.  In his and his family’s case it is personal freedom that has been the cost.  I cannot imagine living how he does as a result of his determination but I applaud his courageous stand for Freedom of Speech in defense of his country.