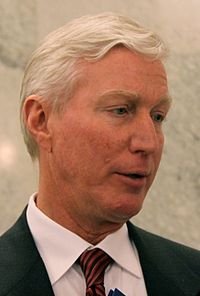 In what ultimately became one of the few bright spots on Election Night for Danielle Smith and the Wildrose Party, Ted Morton lost his seat in the Alberta Legislature.  It was with great relish that I took in the news that Bruce McAllister had unseated the wannabe tyrant Ted Morton in the riding of Chestermere-Rocky View.

This is significant because Ted Morton was the architect of Alberta’s despicable set of laws that tossed Albertans’ property rights on the scrapheap of history.

Ted Morton, who has the audacity to call himself a conservative, led the charge against Alberta Property Owners when he created the set of bills that, when you read their actual function, give Alberta’s government the right to nullify almost all legal rights in that province, up to and including the ability to declare your marriage license null and void.  When taken to their logical end, they can even go so far as to declare any citizen’s Birth Certificate or Death Certificate null and void.

When the State has the power to declare you “not born”, and your land title non-existent, you are no longer living in a “conservative” province, or even a democratic one.  You are living in a totalitarian state far greater than anything even Joseph Stalin imagined.  While he certainly killed millions of his own citizens, he never attempted to declare them “not born.”

So while I am as shocked and horrified as anyone about how the polls could say one thing and the election results the exact opposite, I will take solace in knowing that Ted Morton will no longer be at the Cabinet table destroying what few rights remain for Albertans.

Not that Morton’s unceremonious exit from the Cabinet table will prevent United Nations-trained Alison Redford from doing her best to continue on with her own version of Agenda 21, of course.  Redford and her so-called conservative government has been intent upon destroying Alberta’s prosperity for some time and now that she’s been given a mandate to continue with that destruction I have no doubt she will move full speed ahead.

With luck the Wildrose Party will slow down Redford’s anti-freedom juggernaut or at least spend the next 4 years shining the light of truth on Redford’s assault on our Rights and Freedoms.

“I want you to know that I intend to be the best MLA you have ever had,” Bruce McAllister told his supporters at the Chestermere Recreation Centre.

“If I do nothing else but represent you, meet with you, advocate for you or bring your concerns forward then I’ve been a good MLA,” he said, to wild applause.

While Redford enjoys a substantial majority she won’t be able to hide from Danielle Smith inside the Alberta Legislature.  Smith will, no doubt, continue on her mission to make Alberta MLAs accountable to the people they are supposed to represent.

Danielle Smith was on the right track with her Alberta Accountability Act, something Redford was adamantly opposed to.  Redford, like all good career politicians, believes she knows best while feeling perfectly entitled to 30% pay increases for herself and her cronies.

I’ll be looking forward to watching the sparks fly as Redford continues to try and justify her feeding from the Taxpayer Trough another 4 years.

In the meantime MLAs will continue to be Edmonton’s representative to the people instead of what they should have been all along: the People’s Representatives to Edmonton.

Maybe then Albertans will finally have had enough of Redford and her Progressive Conservative Party, which isn’t conservative at all.

If you missed the series of videos I posted a few weeks ago that describes in great detail how Ted Morton’s laws destroyed the property rights of all Albertans then I highly recommend you revisit this article: Albertans: Alison Redford stole your property rights. NOW is the time to take them back.