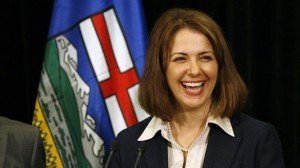 During the Leadership Debate last week Alison Redford tossed out the fact that Danielle Smith “had no experience” governing a province as though that was somehow a bad thing.

It’s a bizarre statement but one that gains traction with the Chateratti across Alberta, since the drive-by media is always quick to parrot Redford’s blathering verbatim, as though it actually meant something.

No, Alison Redford is, like most politicians who have sucked off the public teat for longer than a single election cycle, utterly convinced of her own self-importance.  The world cannot run without her and she is fully entitled to anything she wants as a result of that, including 30% pay increases at a time when most Canadians are grateful they don’t have to take a threatened pay cut just to keep their jobs.

Watching the Leadership Debate when Danielle Smith posed the question to Redford was comedy at its best.  Redford looked like Smith had just hit her in the face with a shovel of dog poop.  It was classic.

Not a sound escaped her mouth, however, but her face said it all.

I am entitled to my 30% pay increase, Danielle, now shut up and go away.

There is a reason the Alberta Progressive Conservative Party is on the ropes and, if polls are to be believed, on the verge of being wiped out of Alberta.

They’ve been governing the province so long that the people who were eligible to vote when they first took power are now 62 years old.

They have been in power for the entire working life of a generation of Albertans.

No wonder they feel entitled.

The problem with all that feeling of entitlement, however, is that they have become nothing more than professional hucksters, willing to say anything once every 4 years so they can keep the gravy train rolling.

That’s what’s so scary about Danielle Smith and her Wildrose Party: they’re NOT professional politicians.  They’re mere citizens who have actually contributed to society their entire working lives and are now ready to give back.

Professional politicians like Alison Redford have dug Alberta and Albertans into a massive financial hole.

Professional politicians like Alison Redford have passed law after law stripping Albertans of their Property Rights.

Professional politicians like Alison Redford have passed massive pay increases for themselves, promised unions anything that will garner their votes, and then told Albertans to shut up, suck it up and move on.

How very progressive… for it certainly isn’t conservative.

What Alberta desperately needs is people who have no experience with how government has worked the past 41 years, but have buckets of experience running companies profitably; people who comprehend how to run a business that doesn’t require massive bailouts.

The very last thing Alberta needs is more from the self-entitled Political Class.

No, the Political Class needs to be tossed out with the trash so Alberta can rebuild itself into the economic powerhouse it can and should be.

Danielle Smith and her band of “inexperienced” Wildrose Party candidates are just the people for that job.