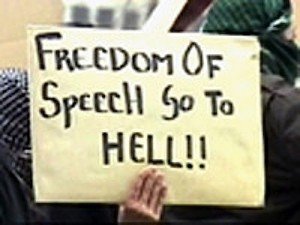 As the lunatic left tries desperately to find some way of slowing down the Wildrose electoral juggernaut, such bastions of tolerance as Warren Kinsella and the Edmonton Journal have declared that pastors have no right to actually write about what they believe.

This is hardly surprising from either source, both of whom believe tolerance should only be applied to their views, not anyone else’s.  Freedom of Speech rights only apply to left-wing ideas and pastors such as Edmonton’s Allan Hunsperger should, well, just shut up.

It’s typical of the left.  Tolerance is a one-way street, that one way being their way, of course.  Any opposing views are nothing more than hate.  The very title of Mr. Kinsella’s post, Danielle Smith defends hate, made that very clear.

Hating God is completely okay, but expressing the Bible’s (and God’s) viewpoint that sin will place you in Hell for eternity is somehow inherently evil and hate-filled, if the likes of Kinsella are to be believed.

It matters not whether the sin is homosexuality, adultery, lust or any other made clear in the Bible, any Pastor who would preach approvingly of that which God hates (sin) isn’t much of a preacher.

The line that seemed to so offend both Kinsella and the Edmonton Journal is this:

This statement is true of every single one of us despite the fact it was written specifically addressing homosexuality.  There is not a human being alive that can claim to be sinless and therefore un-deserving of that lake of fire.

Imagine that… a preacher writing about sin and salvation.

Thankfully, however, Wildrose Leader Danielle Smith is not.  Danielle Smith comprehends the simple reality that everyone, not just liberals, have the Right to Freedom of Speech.

Gasp!  You mean even Pastors?

The post that so upset the looney left was written last summer, long before the election and before Pastor Hunsperger was a candidate for Wildrose.

Now, simply because he is a candidate he is somehow supposed to sanitize his personal and pastoral beliefs to satisfy the likes of the Edmonton Journal and Warren Kinsella?

“I think that it’s absolutely wrong. Of course I disagree with it and the fact that these are people who think that that’s a legitimate perspective, just absolutely blows my mind,” she said.

Thank God Danielle Smith has the courage to stand up to this nonsense and reiterate what she has said repeatedly throughout this campaign, even though the looney left is incapable of actually hearing her:

“When a person is making personal statements in their capacity as a pastor, which he was, I don’t think anybody should be surprised that they’re expressing certain viewpoints,” she said to reporters.

“We’ve communicated on this, that we will not be legislating on contentious social issues. He understands that. He accepts that.”

Every Albertan, every Canadian has the Right to Freedom of Speech and Freedom of Religion.