John Martin is running in the by-election for the riding of Chilliwack-Hope.  He is seeking the seat vacated by former MLA Barry Penner, who retired from politics last year.  This by-election is considered a “must-win” for British Columbia’s unelected premier Christy Clark, who will not face the voters for at least another year.

Mr. Martin is hosting two meet-and-greets at his campaign office (45609 Luckakuck Way, Chilliwack) on Wednesday and Thursday evenings, April 4 and 5, at 6pm.  Please come out and meet the next MLA for Chilliwack-Hope, and the first of many MLAs who will remove the BC Liberals from power.  Finally! 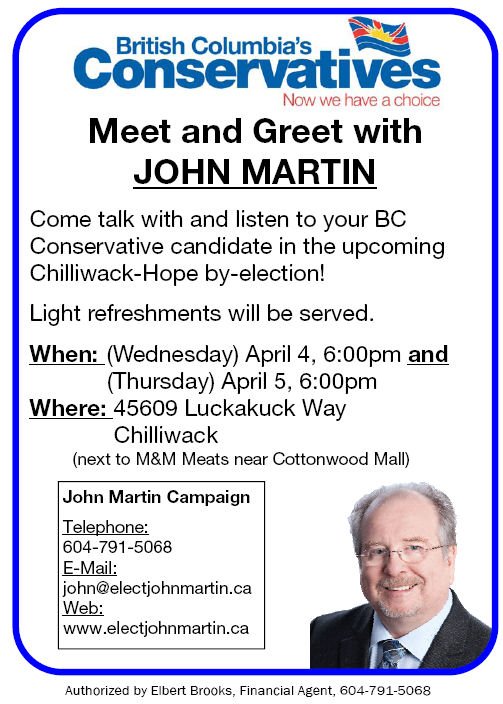 The following is a brief bio of John from his website: ElectJohnMartin.caJohn Martin is a criminologist and has been teaching in the School of Criminology at the University of the Fraser Valley for more than two decades. He has also taught criminal justice to students at Douglas College, the Native Education Centre in Vancouver and Lethbridge College. Additionally, he has run courses for RCMP members at the Pacific Regional Training Centre and recruits at the Correctional Service of Canada’s Staff College.

John specializes in the fields of crime prevention, criminal justice reform, victims’ rights and public safety. He is regularly invited to speak to groups on all matters related to crime and justice and is a frequent guest on talk radio and other media.

John Martin has a long running opinion column that has appeared in numerous newspapers including Chilliwack Times, the Province Newspaper and Abbotsford Times. He has testified before the House of Commons Standing Committee on Justice and Human Rights, the Senate Standing Committee on Legal and Constitutional Affairs, and spent a semester teaching Canadian Studies at Takushoku University in Japan as a visiting scholar.

Raised in the lower mainland, he has lived in various parts of British Columbia including the Cariboo and Similkameen and resides in Chilliwack with his wife of twenty years, Margaret, and their two Shetland Sheepdogs.

He holds a Certificate of Technology in Broadcast Communications from BCIT and two degrees in Criminology from SFU.