South Side Freewill Baptist Church is located in the town of Boiling Springs, North Carolina.  It’s a small town of just 4,301 according to the town’s website.

One of the debates that will rage on until the end of time is whether or not the Bible teaches self-defense. Personally I believe it does, but that’s not the point.  It’s not in debate at all for the parishioners of South Side Freewill Baptist Church. 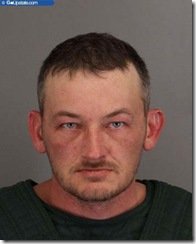 When 38-year-old Jesse Gates kicked in the doors of the church during their Sunday worship service and pointed his shotgun at Reverend Henry Guyton everyone was shocked and terrified.

Aaron Guyton, a concealed weapons permit holder and Reverend Guyton’s grandson, decided that this was the perfect opportunity to put his beliefs on self-defense into action.

Guyton held Gates at gunpoint while fellow parishioners disarmed Jesse Gates and held him until police could arrive. Reverend Guyton was the man who actually plucked the shotgun from Gates’ hands.

Nobody was injured and no shots were fired, a fact that’s consistent with the vast majority of defensive uses of firearms.

Sheriff Chuck Wright made a point of praising Aaron Guyton for having his concealed weapons permit and being willing to use his firearm to defend himself, his fellow parishioners and his grandfather.

“We’re very fortunate we didn’t have gruesome scenes to work there,” Sheriff Chuck Wright said. “I like the fact that a concealed weapons permit holder was prepared to protect the worshippers.”

According to news stories Jesse Gates reportedly was distraught over not being allowed to see his children.

“I’ve been praying, begging,” Gates said. “They won’t let me see my children. I tried everything. What can you do?”

God doesn’t answer prayers in our time, He answers them in His.  While I would never dare speak for the Almighty, I just can’t imagine He would approve of this course of action.

Mr. Gates, presumably there are good reasons why you have not been given access to your children.  Perhaps looking into your heart, praying for forgiveness and asking the Lord to change you into a man worthy of seeing your children would be a better option.

Taking a shotgun into a church and threatening to shoot the Pastor seems like an odd way to get people or God on your side.

The most extensive news report I found on the case had the following to say about Mr. Gates’ history:

Gates, 38, has been charged with second-degree burglary (violent), disturbing a place of worship, kidnapping and three counts of pointing and presenting a firearm, Wright said. Arrest warrants state that Jesse Gates pointed the shotgun at Smith, Henry Guyton and Powers, and that he intended to kidnap the pastor.

Gates’ sister, Angela Michelle Gates, 34, has been charged with accessory before the fact of a felony. Wright said Angela Gates went to the church with her brother and provided him with the shotgun he used during the incident.

Gates also had a hunting knife in his possession when he entered the church. Ivey said he was charged with violent burglary because he entered the building with deadly weapons.

Wright said that while Angela Gates has no prior criminal record, Jesse Gates’ criminal history includes numerous convictions for burglary, grand larceny and forgery. He is a convicted felon and prohibited from having a gun or ammunition.