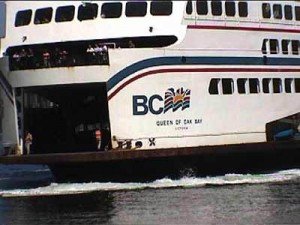 Sometimes things happen. Everyone forgets a bag now and then. It happens to even the most diligent person. But when you are a serving member of the RCMP and your carry bag contains your loaded service pistol… well… there’s going to be a bit of a problem, isn’t there?

Now I commend the unnamed RCMP member for immediately notifying his superiors of his screwup. I actually appreciate that a lot, as it means this person actually has a sense of duty and obligation to do the right thing. That is important, especially in the wake of such recent high-profile examples of the exact opposite.

Robinson, as I have written about extensively here on this site, did the complete opposite of the Mountie who forgot his loaded service pistol on board a BC Ferry. Unlike that man, Robinson did everything he possibly could to obfuscate and confuse the issue, to avoid owning up to his mistake that cost a man his life.

The thought of acting like a real man and owning up to his mistakes is clearly beyond Corporal Monty Robinson.

So when I say I appreciate that the unnamed RCMP member, in the case of the forgotten handgun, immediately stepped forward and admitted his mistake, I mean it. I am being very sincere.

In the ranks of the RCMP this ability to admit a mistake is sorely lacking, so seeing a man do so in this case gives me some small measure of hope for the RCMP.

It takes a real man to stand up, admit it and face the consequences, whatever they may be. He’ll undoubtedly have some sort of reprimand placed on his record and he might even get a few days suspension without pay. All that is as it should be.

Because he is a serving member of a police force, the odds of his being charged with a crime are pretty slim. Unless evidence comes to light about this person that proves he is a real scumbag (which I doubt given his actions so far), I’d actually prefer he NOT be charged with a Criminal Code offense.

Yes, that’s a little shocking coming from me, isn’t it?

My attitude of relative leniency in this case is liable to surprise all those yahoos who like to call me “anti-police” or “anti-RCMP.” Just for sport I’ll clarify my position once again, just so those folks aren’t disappointed.

I am not nor have I ever been anti-police or even anti-RCMP. What I am and will always be is anti-corrupt police and anti-thug police, regardless of which police crest they happen to wear.

When Monty Robinson kills Orion Hutchinson and, without even bothering to check if Orion is alive or dead, he runs home to pound back a couple shots of vodka so he can’t get nailed with impaired driving… yeah, I’m all over him like flies on … well… you know what I mean.

When Geoff Mantler kicks Buddy Tavares in the face for absolutely no reason, yeah, I’ll call for that thug with a badge to be sent to prison for a very long time.  It’s where he belongs.

When Staff-Sgt. Travis Pearson has sex with a subordinate in the back of a police cruiser while ON DUTY, yeah, I’m going to call for his resignation. I don’t think that’s out of line given he was formerly the RCMP Professional Standards Supervisor. If any cop ought to know that it’s wrong to have sex in the back of a squad car with a subordinate, it ought to be Staff-Sgt. Travis Pearson!

But it shouldn’t take a former Professional Standards Supervisor to know that’s wrong, should it?

All it should take is a man with the smallest amount of moral fibre, which it would appear Pearson is lacking.  (For the record I couldn’t care less if the sex was not his idea.  He was the superior officer.  It was his duty and nobody else’s to behave appropriately.)

Robinson and Mantler are precisely the kind of cops that should be kicked off the force in a heartbeat and flagged so no other police force ever gives him a second glance.

Someone like Robinson has proven repeatedly that he cannot tell the truth, cannot do the right thing, cannot stand up and admit he made a mistake. He believes he is utterly above the law and as such, will always be my first example of what a cop should NOT be.

Mantler is just a thug with a badge. Like Robinson, he thinks he is above the law. He’s not, no matter how daintily he is treated by his fellow RCMP members and Crown Prosecutors.

The RCMP member who left his handgun on the ferry is no Monty Robinson. He is no Geoff Mantler.

That RCMP member actually had the balls to admit he made a mistake, regardless of the consequences to himself personally.

I like that quality in a cop. I wish more of them had it.

He screwed up. He knows it. His superiors know it. You and I know it.

Should he be sent to prison for it? I don’t think so.

But then I don’t believe anyone, RCMP member or not, should be tossed in prison just because they don’t have a pretty piece of paper in their wallet and another one sitting beside the handgun in their gun safe.

The double-standard in how this “crime” is handled is obvious, or at least it should be. Because he is a cop he will likely get a slap on the wrist and face no criminal code charges. As I’ve said earlier in this column, I’m okay with that.

The problem I have is that any other mere mortal, any other mere citizen like you or me who left a loaded handgun on a ferry would be facing at least half a dozen Criminal Code charges and a decade or more in prison.

That double-standard has got to stop.