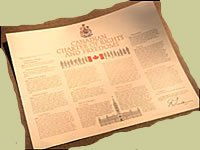 In what is becoming a trend across Canada, judges are having less and less patience with police forces who illegally search a person’s vehicle, residence or person.  The latest case involves two people who [allegedly] have known gang affiliations in Burnaby, BC.

Damion Ryan and Theresa Latham faced a total of 30 gun charges after police searched their home after responding to a 9-1-1 call outside their residence in August 2010.  The Emergency Response Team was responding to a “shots fired” call when they forced their way into Ryan and Latham’s basement suite.

Police claimed to be searching to see if anyone was injured inside the basement suite, which is legitimate.  What is NOT legitimate is using that excuse, searching for injured people, to search the entire suite for anything and everything else, including hidden firearms.

“The critical issue regarding the lifting of the mattress is the reasonableness of that act to look for an injured person,” Provincial Court Judge Brian Bastin said.

“In my opinion, it was not reasonable to believe that a person injured or otherwise could have been under the mattress. There was no lump in the mattress.”

None of the firearms were in plain sight, which is the only way police would have a legal leg to stand on.  They weren’t searching for weapons, they were searching for injured human beings.  They did apply for a search warrant, but not until after they had already performed the illegal search, and that search warrant contained gross errors.

“Had the true state of affairs been presented to the Judicial Justice of the Peace, it is my opinion that the search warrant should not have been issued,” Judge Bastin said. “I have found that police exceeded their powers both in entering the basement suite in question and in the manner in which they searched the suite thereafter.”

Thankfully we have judges like Judge Bastin willing to protect our Rights when nobody else will.  He even went so far as to call the actions of police to be “serious collective carelessness by the police officers involved.”

Naturally the Crown Prosecutor wasn’t willing to take no for an answer and asked that the evidence be allowed in the “interests of society.”  That’s legalese for “we screwed up royally but want you to let us get away with it, Judge.”

“I conclude that the long-term repute of the justice system is better served by the exclusion of the challenged evidence. Therefore I rule that all of the evidence seized from the Oxford Street residence in the course of the execution of the search warrant is not admissible at trial.”

As a result of that ruling all charges against the couple were dropped as the Crown had no evidence they could use to prosecute their case.

This doesn’t mean the guns were returned to the couple.  They were not.  All the seized firearms and ammunition was ordered to be forfeited.

Damion Ryan is apparently no angel.  According to the Burnaby Now article he is “a violent criminal with gang affiliations.”

Thing is, whether he is or is not a violent criminal as the Burnaby newspaper alleges, or even whether he has gang affiliations or not is not the point.

Like ALL Canadians Damion Ryan has Rights that are guaranteed to us.  The police violated those rights and, as a result, the case against Ryan and his girlfriend was tossed out.

The Charter of Rights and Freedoms isn’t generally worth the paper its printed on, but there are days where good judges realize that when police break the law and violate our rights, there is a single, simple recourse.

I don’t say this because I want violent criminals wandering our streets with guns. I don’t.  They give decent law-abiding gun owners like me a bad name.

I also don’t know if Damion Ryan is what the newspaper says he is.  It doesn’t matter.  What matters is that police violated his Rights and, as a result, Judge Bastin did the only thing he could to correct that atrocious wrong.  He excluded all evidence obtained by the illegal search and dismissed all charges against the couple.

To paraphrase another eloquent writer, it is better to have an [alleged] violent criminal on the street than have our cherished Rights and Freedoms trampled by police in the name of expediency.