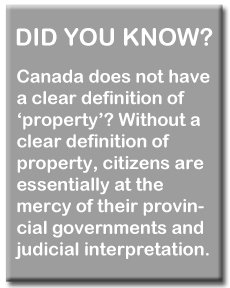 Most Albertans have no idea that the Progressive Conservative government, under the so-called “leadership” of Ed Stelmach and Alison Redford, literally extinguished property rights in the province of Alberta.  This was done in a deceitfully systematic and methodical way using Bill 50, Bill 19, Bill 36 and Bill 10.

The combined effect of these laws and the order in which a section in one Bill over-rides the so-called “protections” in another mean the Alberta government can literally declare your marriage null and void, can revoke your birth certificate and even your death certificate.  Land titles are meaningless as they too can be revoked at the whim of a minister.  You have absolutely NO recourse.

Rapists, murderers and child molesters ALL have more rights in Alberta than lawful property owners.  THEY all have the opportunity to defend themselves in court.  You, the honest home or business owner, DO NOT.  There is NO recourse to the courts and in most cases NO APPEAL PROCESS at all.

These are bold claims, but claims that can be backed up completely, and in detail.

Joe Anglin (http://joeanglin.ca/) has spent considerable time and effort to unravel the complexities of these Bills and has a video presentation that clearly defines how a violent criminal has more rights in Alberta than a lawful property and business owner.  (See the links at the end of this article for the entire video series.)  If you are not outraged and furious after watching the very first segment, well… I don’t know what to say. Maybe you should check to see if you have a heartbeat!

What the government of Alberta has done is what you expect from Soviet Russia circa 1930, not Alberta in the 21st century.

Naturally, like all tyrannical and freedom-hating governments, they claim these powers will never be used.

There is only one sane response to that kind of stupid rhetoric: Why did you give yourselves the power if you have no intention of using it?

Naturally Alison Redford’s government will NOT answer that question and will go to great lengths to try and explain away what they’ve written and passed into law in Alberta.

Alison Redford has made a claim that, for a career politician, is stunningly true.  She said

“This election will be a defining moment, where we will decide what we want the future to be and how we want to conduct ourselves.”

On April 23rd, 2012, Albertans have a choice between freedom and liberty or more nanny state government at the hands of Redford’s dictatorial hand.

Freedom and Liberty is represented by Danielle Smith’s Wildrose Party, and they have stated unequivocally that they will repeal Bill 50, Bill 19, Bill 36 and Bill 10.

For the sake of Albertans and indeed all Canadians I hope and pray that Alberta chooses Freedom and Liberty and tosses these cretins from office on April 23rd, 2012.

If you do NOTHING else while you’re here, take ten minutes to watch the very first segment. That is all it will take for you to understand how the Alberta Progressive Conservative government has stripped Albertans of their most basic right to own private property.

I urge you to watch the entire presentation because once you do, you will be completely outraged at what your Alberta Progressive Conservative government has done to your rights and freedoms.