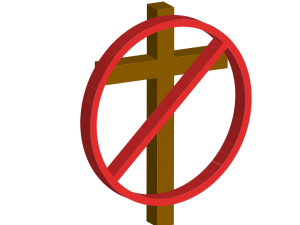 A cultural showdown is in production on the world stage against the values of the estimated 2.1 billion who belong to the world-dominant Christian religion.

Collecting 192 Marxist member nations under the umbrella of the United Nations–all willing to do the UN’s dirty work–translates into waging a gigantic holy war against Christianity.

The biggest obstacle thwarting the UN’s insatiable ambition is that Christians hold to a doctrine of inalienable God-given rights of freedoms, liberties and religion and the staunch belief that church and state will remain separate.

The principle of separation renders governments powerless to achieve the UN’s goal when a church refuses to denounce God and engage in a satanic private-public partnership with the Establishment, unlike the Islamic countries where religion has an umbilical attachment to the state.

To date, these factors have frustrated the UNbelievers at the United Nations, a cult controlled by a bunch of psychopathic Illuminati lunatics, from replacing the indomitable Christian religion with an irrational One World Religion that uses the UN Charter as its bible.

However, the United Nations, like the Nazis, has never laid out any concrete philosophy. The global organization has merely scrambled a mishmash of disconnected thoughts into the member nations’ brand of lunacy and come up with chaos and terrorism.

Paganism and superstitions have replaced any semblance of what might have been considered logic or pragmatism.

“Christianity was founded on the Old Testament (Torah) Jewish values,” reminded the late Aaron Zelman, founder of Jews for the Preservation of Firearms Ownership (JPFO). “It was not founded by moral relativists, Marxists, secular humanists, atheists, Hindus, Buddhists, or Muslims.”

Yet the UNbelievers are determined to crush Christianity. And the UN has plenty of cheerful helpers willing to “rot” Christianity from the “inside out”.

For starters, some “lapsed Christian” politicians hanging out in Washington, D.C. are so politically correct they will not let the words “under God” contaminate their lips when mouthing the pledge of allegiance to the American flag. They want the “offensive” words removed from the oath.

Further, Bibles have been removed from hospitals; the Bible, Lord’s Prayer, Ten Commandments, Golden Rule and any reference to Christianity has been banned from sight and thought in Marxist public schools.

So not to “offend” the delicate sensitivities of non-Christians, “Christmas holidays” is gradually changing into the pagan worship of “Winter Solstice” and “Spring Break” is creeping into “Easter holidays”.

The cheerful Marxist media delighted in embarrassing the church by exaggerating mainly-fabricated witch-hunt tales of sex scandals that condemned many ministers and priests whose reputations were badly tarnished before the fortunate ones were able to prove innocence.

Overblown residential school abuse stories nearly broke some churches selling property to pay class-action suits that served mostly to make lawyers rich. The “survivors” only had to sign up as “mistreated” complainants and wait for a cheque to arrive in the mail.

The media never bothered interviewing the ones who enjoyed their residential school experiences and were thankful the church gave them a good education. To show appreciation, today some of those “residential school survivors” and their families are faithful church-goers and donors.

To continue the persecution, world governments are expected to find stupid, time-consuming methods to comply with the UN’s directive: ridicule, persecute, discriminate against Christians and desecrate their churches, services, cemeteries and religious objects until the “infidels” learn to give up their God and devote themselves to a One World Religion.

One recent fallout has come from the Christian-dominated country of Britain.

Britain decided to argue in the European Court of Human Rights that Christians should be forbidden from displaying harmless symbols of faith worn on a neck chain while kirpans are recognized as legitimate Sikh gear to demonstrate their “religious and cultural loyalty”.

The short, sharp sword can legally be stashed in a sash and paraded around school rooms and public places where non-Sikhs can’t even carry nail clippers.

The politically-collect agenda behind Britain demonizing Christians is an old Nazi tactic, employed simply to create chaos to distract the masses while the government is carrying out some other sinister plot in secret.

One fuss happened when the employers of two Christian UK women demanded 61-year-old Nadia Eweida and 56-year-old Shirley Chaplin remove or hide their cross and crucifix on the job or be dismissed.

To their credit, they refused.

Eweida, a Coptic Christian, was suspended without pay in 2006; Royal Devon barred Chaplin from working with patients on the wards, thus ending her beloved 31-year nursing career when she was relegated to a desk .

British Airways claimed that Eweida breached uniform code although BA later changed its policy. Regardless, Eweida lost her challenge against an earlier employment tribunal decision at the Court of Appeal and in May 2010 was refused permission to take her case to the Supreme Court.

The Conservative Party’s David Cameron, prime minister of a predominantly Christian country, has to be somebody’s puppet to allow the British government to jump into the fray.

Since the troubled European Union is on the verge of collapse, it would seem that the British government should have more important matters to deal with than lawyers wasting time senselessly yammering before the Human Rights Court in an attempt to pretend Article 9, a reinforcement of “religious freedoms”, doesn’t exist, when it definitely does.

The British government’s argument has been that wearing religious ornaments to work are grounds for dismissal since the symbols are not a “requirement” of the Christian faith.

Requirement or not, this is a personal, sentimental decision like never removing a wedding band. Hiding a religious symbol would indicate the person is embarrassed to be seen wearing it, which certainly was not true with these two UK ladies.

Not only should the government not be poking its nose into a woman’s accessory code. Britain never uttered a peep when swastika earrings and bracelets were the fashion rage. And the state should definitely stay out of the church’s affairs.

However, if necessary, the church can rectify the “requirement” conflict in a jiffy. It no doubt would cool the jets of overzealous employers, educators, bureaucrats, enforcers and regulators.

And while the church is rectifying the little piece of business, maybe it should add “.38 revolver” to the list of “required” items to be carried at all times to offset the Sikhs’ kirpan, a religious symbol “required” to be carried “in defense of the weak”.

Since British Airways had no objection to employees of non-Christian faiths wearing religious garments and symbols, Eweida was rightfully stunned when given the ultimatum about her Christian ornaments.

Chaplin also refused to remove or hide her neck chain and cross which has sentimental value; she has worn it since her confirmation in 1971. She had never before received complaints about the visible Christian symbol.

Not only are the militant atheists and devout secularists trying to undermine the Christian religion, but the politically-correct, activist judges recently ruled against recognizing Christians’ Biblical observations of Sunday as a day of rest and their beliefs in a marriage between a man and a woman only.

According to the sage observations of Deacon Nick on Protect the Pope.com: “It is obvious that the UK government, and the legal establishment are seeking to find ways to circumvent article 9 in the Human Rights Act. Freedom of religion will only be allowed to Christians on terms set by the government, making the Catholic Church, and all other Christian communities in this country, state-controlled religions.”

As a reminder of how far Britain has stupidly spun off the rails while playing lapdog to the United Nations, here is a sane, uplifting excerpt from a Reuters piece, published in the UK press on December 12, 2007.

“It’s time to stop being daft about Christmas. It’s fine to celebrate and it’s fine for Christ to be star of the show,” said Trevor Phillips, chairman of the Equality and Human Rights Commission.

So he joined forces with minority religious leaders to put out a blunt message to the politically correct: leave Christmas alone.

Why can’t we have more nativity scenes in Britain?”

“Hindus celebrate Christmas, too. It’s a great holiday for everyone living in Britain,” said Anil Bhanot, general secretary of the UK Hindu Council.

Sikh spokesman Indarjit Singh said: “Every year I am asked ‘Do I object to the celebration of Christmas?’ It’s an absurd question. As ever, my family and I will send out our Christmas cards to our Christian friends and others.”

More than 70 percent of Britons – some 41 million – are Christian,

according to 2001 census figures. Muslims are the second-largest religious group with about 1.6 million in Britain.”

That heartwarming article does not sound like the Unbelievers are going to derive much bench strength from the non-Christian community at large in Britain.

Actually, it is not the Christian religion that needs destroying. It is the destructive United Nations that has to go. So far, that dangerous global organization has managed to ruin every African, European and Latin America country and is working on North America.

If not stopped, those crazed UNbelievers, whose UN Charter bible speaks of “peace” in an inaccurate context, won’t be satisfied until every religion is pitted against and fighting each other to the point that no man is left standing and World War III has pulverized the entire planet.

Every individual can play a part: Demand that your government withdraw its membership and your generous tax contributions from the United Nations posthaste.