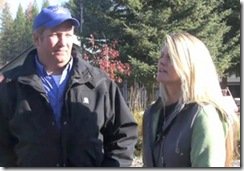 As amazing as it sounds, the United States Supreme Court has actually ruled against the Environmental Protection Agency (EPA) for their abusive violations of the rights of Mike and Chantell Sackett of Priest Lake, Idaho.

The EPA is one of those wonderful agencies that treats Bureaucrats Rule #1 as Gospel.

The Rules are More Important Than People

The EPA treats people with complete and utter contempt and it is that contempt that prompted the US Supreme Court ruling against them.  They have a habit of issuing what the Supreme Court described as “drive-by” decisions and then refuse to hear any appeals to those arbitrary dictates.

Mike and Chantell Sackett bought a piece of property, obtained all the necessary licenses and permits to build their dream home.

Then the EPA descended upon them like a plague of bureaucratic locusts. They demanded the Sacketts “return the property to its pristine condition” and apply for permission to use their own land.

To quote the WorldNetDaily.com article on this horrific case,

Further, the EPA, in collusion with the 9th U.S. Circuit Court of Appeals, told the couple they could not even challenge the decision unless they went through that expensive process.

The EPA previously had threatened the couple with fines of up to $75,000 per day for failing to follow the agency’s intrusive “compliance” plan through which federal officials not only effectively seized control of the land, but also the couple, by demanding their paperwork records and other detailed information.

Damien Schiff, principal attorney for the Pacific Legal Foundation, which represented the couple without charge, had argued the case at the Supreme Court on Jan. 9.

He said the implications of the decision are clear.

“EPA is not above the law,” he said. “That’s the bottom line with today’s ruling. This is a great day for Mike and Chantell Sackett, because it confirms that EPA can’t deny them access to justice. EPA can’t repeal the Sacketts’ fundamental right to their day in court. And for that reason, it is a great day for all Americans, for all property owners, and for the rule of law.”

He continued, “The justices have made it clear that EPA bureaucrats are answerable to the law and the courts just like the rest of us. EPA can’t try to micromanage people and their property – it can’t order property owners to dance like marionettes – while denying them any meaningful right to appeal to the courts. It can’t threaten property owners with financial ruin and not have to justify its threats to a judge. And it can’t issue lazy, drive-by ‘wetlands’ edicts about private property. It will have to put in some honest work and use credible science, because the regulators must be able to justify their wetlands orders in a court of law,” he said.

Schiff said, “Rest assured, while today’s ruling strengthens everyone’s individual rights and property rights, and everyone’s access to justice, it does not weaken legitimate environmental protection one iota. Regulators will simply have to be professional and thorough, not careless and slipshod, when they issue wetlands orders.

“In the case of urgent pollution threats, EPA will still have the power, as it does now, to seek an immediate court injunction. But when there is no emergency, EPA can’t start ordering property owners around – and threatening them with tens of millions of dollars in fines, as with the Sacketts – without first doing some genuine due diligence. EPA will have to be prepared to show a reviewing court that its wetlands regulations are really necessary – not just a power trip.”

Mike Sackett said he and his wife were subjected to “hell” by federal bureaucrats.

“We are very thankful to the Supreme Court for affirming that we have rights, and that the EPA is not a law unto itself and that the EPA is not beyond the control of the courts and the Constitution,” he said. “The EPA used bullying and threats of terrifying fines, and has made our life hell for the past five years. It said we could not go to court and challenge their bogus claim that our small lot had ‘wetlands’ on it. As this nightmare went on, we rubbed our eyes and started to wonder if we were living in some totalitarian country.

“Now, the Supreme Court has come to our rescue, and reminded the EPA – and everyone – that this is still America, and Americans still have rights under the Constitution. We want to thank Pacific Legal Foundation for defending us, without charge! Without Pacific Legal Foundation, this day would have not come, and this court ruling that vindicated the rights of all Americans against bureaucratic bullying, would not have happened.”

The family bought the small parcel in 2005 in an area surrounded by other homes. The EPA’s decision, without hearings or notice, that it was a “wetlands” was accompanied by threats of fines and penalties.

The Sacketts wanted to challenge the EPA’s decision, but the agency refused to hold a hearing, and then the 9th Circuit Court said they had no right to judicial review at that point. The court said the couple would have to pay for a years-long “wetlands” permit process first.

That process could have cost 12 times the value of the land, the legal team working for the Sacketts said.

When the case was argued in January, justices suggested the EPA actions were “outrageous” and “very strange.”

Samuel Alito said that the scenario was one that most homeowners would say “can’t happen in the United States.”

And Elena Kagan said it was a “strange position” for the government to adopt in insisting that the property owner has no right to a hearing on such an order.

“What would you do if you received this order?” he asked.

Alito also noted it was “very strange” for a system that would require a party to apply for a permit to build on “wetlands” when the fact being challenged was whether the land was “wetlands.”

Justice Antonin Scalia called it the “high-handedness of the agency” when the EPA demanded the couple turn their land into a protected preserve, installing vegetation that wasn’t there before they started their project.

The government did not contest the recitation when Alito summarized what had happened:

You buy property to build a house. You think maybe there is a little drainage problem in part of your lot, so you start to build the house and then you get an order from the EPA which says you have filled in wetlands, so you can’t build your house. Remove the fill. Put in all kinds of plants. and now you have to let us on your premises whenever we want to … you have to turn over to us all sorts of documents, and for every day that you don’t do all this you are accumulating a potential fine of $75,000 and by the way, there is no way you can go to court to challenge our determination that this is a wetlands until such time as we choose to sue you.

Justice Ruth Ginsburg noted that the couple had sought a hearing from the EPA over the controversy, “and the EPA said no.”

Chantell Sackett had described for a congressional hearing recently the shock when they found federal EPA agents on their land, ordering them to stop foundation work, “restore” the land with non-native species, fence it, guard it for several years and then request a permission to continue their home project that in all likelihood would be denied.

“That’s what the EPA does. They came into our life, took our property, put us in limbo, told us we can’t do anything with it, and then threatened us with fines,” she said. “They use intimidation and we as American people, my husband and I, are fed up. We’re scared.

“They can’t be allowed to do this,” she continued. “It’s wrong. This is why we are suing the government, the EPA.”