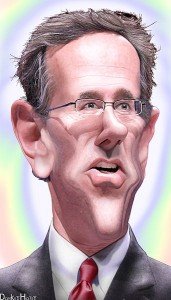 Former Pennsylvania senator Rick Santorum needs to lose the primary race and lose it soon.  Any so-called “conservative” candidate who claims big government is a good thing is NOT a conservative.

“to our credit”, he said, the Republican Party has “morphed away from the Goldwater idea that government just needs to be smaller, it needs to do less, it needs to be doing nothing except for what its core functions are.”

If Santorum’s notion is right, then conservatism is dead.  Period.

Government was created in America with specifically enumerated “core functions” and government was limited to those functions.  It’s all in this pesky little document called The Constitution.  Sounds to me like Rick Santorum ought to read it some time.

To quote Ann Coulter on this point:

The Constitution mostly places limits on what the federal government can do. Only in a few instances does it restrict what states can do.

A state cannot, for example, infringe on the people’s right to bear arms or to engage in the free exercise of religion. A state can’t send a senator to the U.S. Congress if he is under 30 years old. But with rare exceptions, the Constitution leaves states free to govern themselves as they see fit.

Like all government officials (Santorum was a Pennsylvania Senator), Santorum swore an oath to uphold the Constitution of the United States.  Clearly he sees himself one of the more progressive members of the Political Class who, unlike we mere citizens, has a “vision” for how things ought to be.

We’ve already had almost 4 years of “vision” from another progressive man, haven’t we?

Is there really any doubt about how that’s worked out for America so far?

Does America seriously want an election between two pigs feeding at the taxpayer trough, each determined to promise the people more of their own money?

If Santorum gets the nod for the Republican Party Presidential Nomination then two things are certain:

1. There will be no alternative choice offered to the American People this November, and
2. Barack Obama will be laughing his way to his second and unaccountable term in office.

To quote a friend of mine…

Obama’s consolidation of power (sovereignty) is almost complete. Restricting speech, implementing martial law and just being an all-around omnipotent being is obviously his end game. If he gets re-elected, America will be speaking Arabic and bowing toward Mecca three times a day…

My hope and prayer is that Americans are willing to change the course of their nation this November.  Dumping Obama is the only way that America stands a chance at regaining the shadow of her former glory as envisioned by the Founding Fathers.