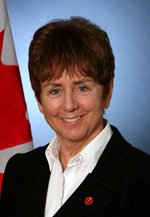 Senator Nancy Greene-Raine is a senator from British Columbia.   Given the Loony Left Coast’s penchant for all things politically correct, I expected a BC Senator to espouse the standard PC line on carbon tax credits and global warming.  I was, therefore, extremely pleased to read her speech in the Hansard where she clearly explains why amending the tax code to give tax credits for people buying “carbon credits” is such a bad idea.

If you agree with the good Senator, please write her at rainen@sen.parl.gc.ca and thank her for standing up for common sense.  It’s such a rare thing in Canadian politics… or politics anywhere for that matter.

Hon. Nancy Greene Raine: Honourable senators, I rise to address Bill S-205, an Act to amend the Income Tax Act. If passed, this amendment would give tax credits to Canadians who invest in so-called carbon offsets. While I have no objection to citizens spending their own money in any way they choose, I do not support the government’s giving tax credits for carbon offsets. I say this for several reasons. First and foremost, I consider it an unnecessary and undesirable expense at a time when we should be looking for ways to reduce the tax burden on Canadians. While it is true that the amendment would benefit those who invest in carbon offsets, it would be an expense that would have to be covered by all other taxpayers. I say it is unnecessary because, contrary to the assertions of the honourable senator sponsoring the bill, it addresses an issue that is more and more being questioned by new scientific evidence. We simply do not know that our actions have a significant impact on the global climate, let alone that “the consequences of not acting can be catastrophic,” to quote Senator Mitchell.

I do not pretend to be a climate expert, but I have spent a lot of time over the past decade reading about this topic and listening to those scientists who are true experts. This, I believe, puts me in a good position to apply a common sense approach to the issue.

Before I outline what I think would be a logical, “no regrets” approach to climate change, I need to clear up some misconceptions about so-called carbon emissions, a term erroneously used by the honourable senator sponsoring this bill in his speech in this chamber on November 23. In Canada and in the United States and, indeed, in many industrialized countries, about 85 per cent of the greenhouse gas we release, other than water vapour, is carbon dioxide. This is not carbon, but a compound of one carbon atom and two oxygen atoms, yielding a molecule that has the chemical formula CO2. This is not merely an academic point. Ignoring the oxygen atoms and calling CO2 emissions carbon emissions is as appropriate as ignoring oxygen in water vapour or H2O and calling it hydrogen. Most Canadians would regard it ridiculous to have their water bill labelled a hydrogen bill.

The “CO2 is carbon” mistake is a common misconception, and it unjustifiably encourages people to view this benign gas as dirty, which indeed it is not.

Unlike carbon monoxide, sulphur dioxide, nitrogen dioxide and other pollutants, carbon dioxide is not toxic. In fact, it is an essential ingredient in plant photosynthesis, without which there would be no life on earth. For the past century, greenhouse operators have been adding CO2 to the air inside greenhouses to enhance plant growth.

This is because plants are somewhat undernourished in CO2 at today’s atmospheric levels. We are closer to low CO2 levels, at which plants die, than we are to any dangerous upper limit. Throughout most of earth’s history, CO2 levels have been significantly higher than they are now, and life flourished.

Unlike a decade ago, when few scientists dared express doubt that humanity’s CO2 emissions are causing dangerous global warming, it seems now that not a week goes by without some leading expert condemning the hypothesis. On January 27, The Wall Street Journal published an open letter from 16 leading scientists in which they told politicians that they must, and I quote:

. . . understand that the oft-repeated claim that nearly all scientists demand that something dramatic be done to stop global warming is not true. In fact, a large and growing number of distinguished scientists and engineers do not agree that drastic actions on global warming are needed.

Signatories to the letter included such eminent scientists as Claude Allegre, former director of the Institute for the Study of Earth at the University of Paris, and Antonio Zichichi, president of the World Federation of Scientists, in Geneva.

Open letters and petitions like this have been circulating for years, several of which were sent to the three most recent Canadian prime ministers. The best known of all of these documents is the Global Warming Petition Project, which now claims over 31,000 U.S. scientists and technically qualified professionals. They assert in the petition:

There is no convincing scientific evidence that human release of carbon dioxide, methane or other greenhouse gases is causing, or will, in the foreseeable future, cause catastrophic heating of the Earth’s atmosphere and disruption of the Earth’s climate.

Honourable senators, if carbon dioxide and other greenhouse gases are not causing climate change, what is causing it? In December, the Standing Senate Committee on Energy, the Environment and Natural Resources heard from leading climate experts whose research indicates that the primary driver of climate change is the sun. They maintain that the greenhouse gas reduction recommendations of the United Nations Intergovernmental Panel on Climate Change, the IPCC, are simply in error and that humanity does not control our planet’s climate.

I cannot judge whether they are right, but I do think that we must carefully consider well-substantiated alternative theories in a field as immature as climate change science. After all, if governments are to base policies on real science and not become bogged down in mere rhetoric and politically correct dogma, we must hear from experts who follow the scientific method, even, and perhaps especially, when they come to conclusions that are not currently in vogue.

The scientific method lays out how we must first observe nature, then create possible hypotheses to explain the observations, then test those hypotheses and then change our ideas to fit observed facts, all the while encouraging open, science-based discussion and questioning. Yet today, unfortunately, many environmentalists become indignant if one dares question politically correct ideas about climate change. Clearly, this is not constructive.

In his working paper just submitted to Dutch authorities, leading scientist Arthur Rörsch critiqued the UN IPCC, the body whose reports constitute the foundation for many of the government’s climate policies. He shows that their methods at times strongly deviate from the scientific method. In the December Senate hearing, we heard about many of the other problems of the IPCC and how they simply can no longer be trusted as an unbiased source of scientific information.

Consequently, I recommend to the Standing Senate Committee on Energy, the Environment and Natural Resources that they consider doing a thorough study into the current state of climate change science, carefully considering all reputable points of view on the issue. In addition, the committee should consider whether the reports of the IPCC should be relied upon by the Government of Canada for policy formulation. To give members a quick overview of the many problems with the IPCC, I suggest that you read the well-documented review by Canadian investigative journalist Donna Laframboise. Her book is entitled The Delinquent Teenager Who Was Mistaken for the World’s Top Climate Expert. After reading the book, you may no longer consider her book title to be mere humour.

It has often been suggested that to “fight climate change” Canada can easily make a conversion from conventional energy sources to low-carbon-dioxide emitting wind, solar and other power sources. In his speech supporting Bill S-205, the honourable senator promoted these energy sources as job and wealth creators for Canada. However, honourable senators, the experience in Europe tells a very different story.

For example, researchers at the Instituto Bruno Leoni in Italy found that for every so-called “green job” created by subsidies, nearly five times as many ordinary jobs could have been created in the general economy at the same cost. The Italian researchers add:

What’s often ignored is that the creation of green jobs through subsidies or regulation inherently leads to the destruction of job opportunities in other industries. That’s because any resource forcibly taken out of one sector and politically allocated in favour of renewable energy cannot be invested elsewhere.

It is most likely that whatever jobs are created by renewable energy promotion would vanish as soon as government support is terminated.

University of Guelph economics professor Ross McKitrick, sums it up best by saying:

If spending money on greenhouse gas reduction is profitable and makes people better off then there is no need for government to force it to happen.

I wish to make it clear that I believe that the Government of Canada must indeed continue to protect our natural environment, but we must concentrate our energy and financial resources on tackling environmental problems we know to be real, such as cleaning up toxic waste dumps and reducing agricultural and urban runoff that pollutes lakes and rivers. The climate always changes and there may well be nothing we can do to stop it.

In summary, I believe that the real focus of Canada’s climate policy, the no-regrets approach that yields benefits no matter what causes climate change, must be to help vulnerable people and communities prepare for and adapt to inevitable climate change. We should also continue to support scientific research in the field so that some day we may be able to forecast climate to help us get ready for whatever nature throws at us next.