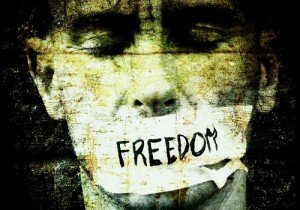 The old saying that “Truth is stranger than fiction” rang through my head as I read the report that the United States Congress had passed a law making it illegal to protest anywhere near a politician.  Naturally President Obama signed it into law immediately since, if it should be illegal to protest near any member of the Political Class, obviously that should be the “God of Hope and Change.”

I probably should have titled this “When Politicians Become Lord and Master instead of our representatives” for that’s certainly how they act.

H.R. 347, the “Federal Restricted Buildings and Grounds Improvement Act of 2011” as it is benignly called, passed with stunning ease in the House of Representatives, 399-3.  Can you believe that there were only 3 votes against it?

Is it just me or is this law even more absurd than Obama getting re-elected in November?  If you don’t think so, you really ought to read the text above again.

There is this pesky little RIGHT that we in Canada share with our American brothers and sisters… it’s called Freedom of Speech. It would appear that this right has just been extinguished in America anywhere that a politician might be present.

What recourse is there when your employees dictate that you cannot protest their ridiculous and stupid actions?  In the United States the answer to that question is “None” or they will have you tossed in prison.

Want to protest ObamaCare?  Best not do it in front of “King Obama” himself.  You’ll be tossed in jail faster than you can say “Stupid Dictator.”

Want to protest the latest draconian anti-gun laws passed in Chicago?  Best not do it in front of the Mayor.  You’ll be tossed in prison faster than you can say “Rahm Emanuel.”

The Bill of Rights says, in part, the following:

“Congress shall make no law respecting an establishment of religion, or prohibiting the free exercise thereof; or abridging the freedom of speech, or of the press; or the right of the people peaceably to assemble, and to petition the Government for a redress of grievances.”

Clearly our American legislators can’t read, but even if they can they certainly can’t comprehend the Constitution of the United States of America.  If they could they would not pass laws that so clearly violate the Constution.

There are actually some politicians who disagreed with the ending of the First Amendment.  Justin Amash (R-MI) said the following about this asinine new law:

“Current law makes it illegal to enter or remain in an area where certain government officials (more particularly, those with Secret Service protection) will be visiting temporarily if and only if the person knows it’s illegal to enter the restricted area but does so anyway.  The bill expands current law to make it a crime to enter or remain in an area where an official is visiting even if the person does not know it’s illegal to be in that area and has no reason to suspect it’s illegal.

“The bill’s language is so overly broad as to put an end to free speech, political protest and the right to peaceably assemble in all areas where government officials happen to be present.

“A person eating in a diner while a presidential candidate is trying to score political points with the locals could be arrested if government agents determine that he is acting ‘disorderly.’ Mind you, depending on who’s making the assessment, anything can be considered disorderly, including someone exercising his right to free speech by muttering to himself about a government official. And if that person happens to have a pocketknife or nail clippers in his possession (or any other innocuous item that could be interpreted by the police as ‘dangerous’), he could face up to 10 years in prison.

“Given that the Secret Service not only protects the president but all past sitting presidents, members of Congress, foreign dignitaries, presidential candidates, and anyone who the president determines needs protection, anywhere these officials happen to be becomes a zone where the First Amendment is effectively off-limits.”

“While the Trespass Bill may have started out with the best of intentions, it has ended up as the government’s declaration of zero tolerance for individuals exercising their First Amendment rights.”

Pity the rest of the political class can’t comprehend a couple of things:

1. They are our elected representatives, not our gods;

2. They each individually swore an oath to protect and defend the Constitution of the United States of America;

3. They need to learn to read (or have someone read to them) the Constution so they can comprehend what the oath they swore actually means.

Michael Mahaffey, communication director for Representative Tom Rooney (R-Fla. and the man responsible for introducing the bill to the House) swiftly tossed aside any and all opposition to H.R. 347, saying that opposition to it is nothing more than:

“a whole lot of kerfuffle over nothing. This (HR 347) doesn’t affect anyone’s right to protest anywhere at any time. Ever. ”

I guess we’ll see about that after the first wave of arrests are made using this grand new law.  They should happen any day now.

What’s next?  This asinine legislation makes its way north of the 49th parallel?