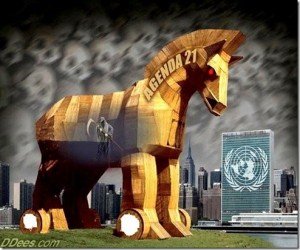 I can ask people if they have heard of Agenda 21. The inevitable answer is “no”. The response to my short explanation is either met with disdainful silence or with a “you don’t know what you’re talking about” retort. If I ask the same people the same question 30 days later they still say “no” they haven’t heard of Agenda 21. Obviously, my explanation didn’t register with them.

On the contrary, my audience has heard of Agenda 21. Everybody has heard of it. They just don’t know it because the term has seldom if ever appeared in the major media outlets in the 20 years since the project materialized at Rio de Janeiro, Brazil during a United Nations Earth Summit Conference in June, 1992.

Anybody who has heard the shop-worn terms and guilt-ridden phrases from the random collection below used in their communities, counties, provinces, territories, states, countries has heard of Agenda 21:

There are thousands of terms, phrases and reports that will keep a person spinning off-balance and interfere with recognizing that Agenda 21 is incrementally devouring communities, territories, provinces and states under the guise of “environmentalism”.

Agenda 21 is not about a cleaner, healthier “environment” or lifestyle; Agenda 21 is about “totalitarianism”.

When I started writing on this subject more than 12 years ago, neither was I using the term Agenda 21. I simply described the greedy land-grabs as unconstitutional and as a way for the environmentalists to dismantle industry which is the number one objective of Agenda 21 and for which I was chided in print by the Marxists who, if they actually knew what they were doing, were trying to hide their purpose from the general public.

The problem is that the highly-paid Marxists members of the non-governmental organizations (NGOs) and their passionate do-gooder volunteers who are on the front lines doing the bidding for the United Nations will one day lose their rights to own property when they are relegated to peasant status along with their opponents as soon as the UN’s communistic plot is in place.

These cheerful helpers are the types Lenin called “useful idiots”.

Agenda 21 simply means “Agenda for the 21st Century”. The 21st Century is here and, due to the Internet where the masses became enlightened about the tyrannical scam, the United Nations has ruthlessly accelerated its pace while simultaneously working in overdrive to block the “peasants” from Internet access.

Agenda 21’s main thrust is to stealthily return ALL land and privately-owned property back to public domain (one-world government control) by relieving people of their rights to own personal property and/or titled real estate, the cornerstone to any free society.

Working in tandem with land alienation which would ultimately return free societies back into medieval feudalism, Agenda 21 is robbing people and enterprises of water rights. Yet clean water in Canada is not in short supply.

But individual Canadians and learned lawyers argue that individual property rights are still protected by virtue of British common law and the Magna Carta of 1215. However, those arguments are not usually accepted by activist judges on either side of the border, should the courts even lower themselves to hear property-ownership cases.

Now that the Internet Revolution has taken hold, people are wiser and able to fight the foe rather than flailing at a bunch of feathers. Therefore, one of the United Nations’ key hardline tactics is to drop the hammer on communities that have seen the light and are opting out of the dangerous Agenda 21 and its subsidiary programs.

Agenda 21 is not a law. But some 179 countries signed documents that would constitute something along the lines of bastardized “gentleman’s agreements”. If the commitments are not fulfilled there are extremely harsh, arm-twisting penalties imposed–and I daresay one catastrophic punishment could be the UN’s refusal to settle a country’s international bank transactions.

The Government of Canada does not appear to have signed any legally-binding documents due to land administration being primarily a provincial Crown matter. But as a “global citizen”, Canada has committed itself to wasting multi-billions of dollars annually on the failed United Nations and its various fees, dues, NATO and so-called environmental projects at the detriment of taxpaying Canadians. It’s virtually impossible to get a handle on the exact dollar figures which are often hidden in budgetary line items or listed under unrecognizable, constantly-changing names.

However, my advice to any community, territory, province, state, county or country that has joined the freedom-sucking Agenda 21, bail out; if your community has not yet enlisted, then stay out.