Imagine the scene.  Your 16-year 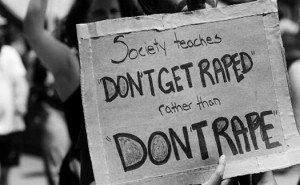 You’re right, she probably shouldn’t have been there in the first place, but she was.  That doesn’t make what follows her fault though.  It’s the fault of the depraved individuals who [allegedly] drugged her and repeatedly raped her, as well as the profoundly morally bankrupt individuals who videotaped, photographed and watched the entire sordid event but did nothing to stop it.

To make matters worse, the cretins posted photographs of her rape in progress on the internet for the entire world to see.

That’s what happened to a young woman during a rave party in Pitt Meadows, British Columbia on Saturday, September 11, 2010.

The morally bankrupt teenage boy who videotaped and photographed the rape was charged with and eventually pled guilty to making and distributing obscene material.  He was sentenced to 12 months probation.  The morally bankrupt youth cannot be named because of the provisions of the Youth Criminal Justice Act.

Speaking to reporters outside the courtroom, the father of the young woman was understandably upset at the appalling sentence, calling it nothing more than a “slap on the wrist.”

Dennis John Allen Warrington of Langley faces charges of producing and distributing child pornography for his [alleged] part in videotaping the young woman’s rape.  That trial has yet to take place.

Worse, the only man charged in his daughter’s [alleged] rape, Colton Ashton McMorris, will not even face trial.  Crown prosecutors dropped all charges against McMorris days before he was scheduled to go on trial.

Crown spokesman Neil MacKenzie had plenty of rationalizations about why the case could not go to trial. They now believe they might lose the case and their precious conviction rate stats might fall.  They couch their reasons in more official language than that, but you get the point.  No point going to trial if we might lose.

It’s bad for the resume.

This is what happens when prosecutorial statistics are deemed more important than justice for a 16-year-old rape victim.

“No one in their right state of mind, including myself, would let something like that happen to them willingly,” the teen told reporters, as her father sat next to her in a small community centre in Pitt Meadows, B.C., a bedroom community east of Vancouver.

“I’ve often wondered why women never reported when they were sexually assaulted, and now I know. It’s a ‘he-said, she-said’ thing.”

“To anyone who thinks this is OK, I’d like you to take your mother, girlfriend, wife, sister, niece, daughter — any female you know — and go do this to them. It’s wrong and we all know it,” said the teen, reading with a steady voice from a prepared statement.

It’s a brave move for a young woman who has had her life destroyed by what was done to her, and one that I hope reaches the people she was speaking to.

There were many people watching what happened to her that tragic night but who have remained silent, preferring to stonewall police instead of helping bring justice to this young woman’s attackers.

Pitt Meadows RCMP strongly believe that more than one person raped her despite the Crown’s unwillingness to prosecute Colton Ashton McMorris.

“I can assure you, knowing the content of these photos, it was not exaggerated what happened to this girl,” said Sergeant Peter Thiessen, who has two daughters of his own.

“Absolutely not. And I would say that if anybody heard the details of what this girl experienced, we wouldn’t be having this conversation.”

Vancouver Rape Relief and Women’s Shelter was also appalled at the news that Crown Prosecutors lacked the will to move forward with this prosecution.

“’Not enough evidence’ means police and Crown failure. We refuse to accept ‘the unlikelihood of conviction’ as a reason to keep this man from facing justice.”

There is an excellent movie starring Gerard Butler and Jamie Foxx called “Law Abiding Citizen” in which a man seeks to educate the District Attorney played by Foxx that making deals with murderers is unacceptable.

Foxx’s character, Nick Rice, has a confrontation with Clyde Shelton, played by Butler, in which the DA makes the statement that he might have lost the case and the murderers of his family might have gone free.

“You didn’t care, Nick.  You didn’t even try.  You could have walked out of that courtroom with your head held high.  I could have lived with that, Nick.”

That, I imagine, is precisely how this young woman and her father feel in the wake of the Crown’s awful decision to drop all charges against Colton Ashton McMorris.

A video of her plea to the public can be seen on The Globe and Mail’s website.

If anyone knows anything about this case that can help bring rapists to justice, please contact your local RCMP detachment.