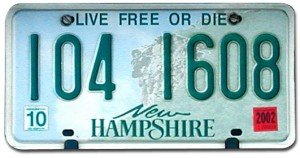 New Hampshire has as it’s state motto the phrase “Live Free or Die“.  If you’re a normal, thinking American you might be forgiven for believing that New Hampshire actually believes in that motto.  In reality, New Hampshire officials, or at least their police, hate the concept so boldly embraced on the state’s license plate.

Anyone doubting that might want to talk to 61 year old Dennis Fleming of Farmington, New Hampshire.  (I’d tell you to ask Carl Drega but they killed him.)

Dennis came home on Saturday, February 18th, 2012 to discover his house had been broken into.  Then he saw local drug addict and criminal Joseph Hebert climbing out of the window of Dennis’ neighbor’s home.

Dennis Fleming yelled at the burglar to stop and then fired a shot into the ground.

Not being a complete moron, Hebert stopped and remained frozen until police arrived.

That’s when the motto Live Free or Die had another nail pounded into its coffin.

You see, as well as arresting the criminal for breaking and entering two homes, the police decided to arrest the victim of the crime, Dennis Fleming, as well.  Then they seized all his firearms.

You’d think that a state that had “Live Free or Die” as its state motto would comprehend the concept of freedom. Sadly, this is not the case.

Let me explain it for the freedom-challenged police and prosecutors in New Hampshire.

Freedom includes the right to protect yourself, to protect your property, and it also implies you ought to do the right thing for your neighbor as well.  You know, just like Dennis Fleming did for his neighbors.

The entire state is not without hope though. Gun Owners of New Hampshire is standing firmly behind Dennis Fleming and is “absolutely outraged” that Mr. Fleming was even arrested.

Penny Dean, a spokeswoman for the Gun Owners of New Hampshire, said

“This homeowner fired at the ground, from all accounts, in a safe direction and held a burglar for police and did things correctly,” Dean told FoxNews.com.

“The fact that this man would be charged is an outrage. Burglars in New Hampshire must know it’s open season, since homeowners cannot defend themselves, as evidenced by this case. This is charging the victim.”

Charging the victim of the crime is becoming the norm across North America.  Authorities on both sides of the border apparently despise anyone acting in self-defense or in protection of their private property.

On the Canadian side of the border, Ian Thomson is still facing charges of unsafe storage of firearms for daring to defend his own life against the three masked men attempting to murder him.

Like Ian Thomson, Dennis Fleming knows he did the right thing.

“I think I did right,” he said Monday afternoon. “I stopped a guy who stole and kept him from doing it again.”

Unfortunately for decent people on both sides of the border, governments just aren’t interested in mere citizens defending their own lives.