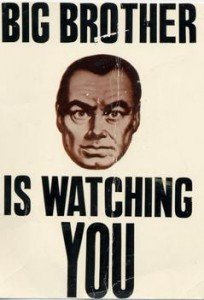 Bruce Cockburn wrote a famous song that contained the line “The trouble with normal is it only gets worse.”

The same can be said for governments.  They always get worse, too.  The current so-called Conservative government is a perfect example of this, and Vic Toews unwittingly tried using this to his advantage.  He quickly discovered, much to his dismay, that Canadians weren’t quite as dumb as he had hoped.

Speaking to Ezra Levant on the Sun TV show “The Source” Vic Toews said with a straight face,

“Well, right now regulatory authorities have the power to do warrantless searches. That is very standard practice.”

Vic Toews is absolutely correct.  It is standard practice in numerous laws on the books:

Vic Toews clearly believes that it SHOULD be standard practice to have Canadians subjected to warrantless searches whenever it suits him, despite the so-called “conservative” nature of his government.

Unfortunately we do not actually have a conservative government in Canada right now.  We haven’t had one for a very, very long time.  The last truly conservative Canadian government probably predates the existence of anyone alive today.

You see, a truly conservative government would place the sanctity of our Rights and Freedoms ahead of any momentary and passing “need” of government.

A truly conservative government would repeal the laws that place the burden of proof on Canadians to “prove a negative”, something Ian Thomson is being forced to do right now in an Ontario courtroom.

Ian Thomson was charged with unsafe storage of firearms, even though there is absolutely no evidence to support the charge, for two reasons:

1) he dared do the unthinkable in Canadian society… he used one of his firearms to save himself from sure death at the hands of three masked thugs intent on burning his house down with him inside it, and

2) some “brilliant” cop decreed that Mr. Thomson was able to retrieve his lawfully-owned firearms “too quickly” when he was saving himself from sure death, therefore he could not possibly have stored his firearms legally.

This statement is, of course, utterly absurd.

Three men were actively trying to murder Ian Thomson.  The entire event is captured on security video for the world to see, and yet the police and Crown prosecutors are going after Ian Thomson as though HE was the one committing the crime of attempted murder.  They dropped “unsafe use of a firearm” and “pointing a firearm” charges when public outcry against the Thomson prosecution become too intense.

Ontario’s Crown Counsel has refused to back down on the safe storage charges though, which just baffles all logic.  Ian Thomson was the victim of the crime of attempted murder.

Naturally, the men who attempted to murder Mr. Thomson by burning down his home with him inside it have NEVER been charged with the crime they were actually committing: attempted murder. They weren’t using guns when they attempted to kill Mr. Thomson, so by the Crown’s logic they aren’t the ones who should be punished to the full extent of the law.

If he doesn’t believe in these freedom-killing laws, why would Vic Toews flippantly quip that

“…right now regulatory authorities have the power to do warrantless searches. That is very standard practice.”

Vic Toews didn’t introduce the Firearms Act, the Fisheries Act or the Wheat Board Act, but he’s very glad someone else did.  He’s also happy to build on these laws that tear down our Rights and Freedoms by saying,

We’ve all heard that logic before, haven’t we?

Conservatives make a big deal out of how they’ve “killed the long gun registry” as though that’s actually done anything to stop the criminalization of Canadians for owning firearms.

Bill C-19 doesn’t do a single thing to repeal the warrantless search provisions that the Firearms Act added to the Criminal Code nor does it remove the provisions that require you to assist those who have decided to search your home without a warrant.

If Vic Toews wanted to do something really substantial for Canadians and act like a true conservative, he would repeal all of the warrantless search provisions from all the Acts that destroy the freedom of Canadians.

Instead Vic Toews wrote all that garbage into Bill C-30 and then tried and pass it off as a shiny new toy that police need or the world as we know it will end.

When we didn’t buy into this freedom-killing garbage, he declared that we who value our privacy and the rule of law are siding with child pornographers.  Nice touch.

Bill C-30 is a horrible piece of legislation.  At the very least it needs a very serious rewrite, ideally with a focus on protecting the privacy rights of Canadians.

Matt Gurney is correct.  Vic Toews should step down as Minister of Public Safety.

Any Minister who will stoop to tactics like calling ordinary decent Canadians “child pornographers” is clearly not someone we want as our Public Safety Minister, especially after he is forced to admit he doesn’t even know what’s contained in the law that has him calling the rest of us to child pornographers!

For more on that, see my February 19th article Public Safety Minister Vic Toews: Are you really as incompetent as your protestations make you appear?

Lastly, Minister of Public Safety Minister Vic Toews made the statement that:

If fair-minded Canadians have come to the conclusion that my comments in that respect that I made in the heat of Parliamentary debate were not appropriate, I’m prepared to accept their judgment.”

“I’m prepared to accept their judgment?”

Toews is not prepared to apologize for the comment that brought about that swift public judgment.  He still doesn’t believe he’s done a thing to be sorry for.

A man with any integrity would have realized he had made a horrible mistake and apologized immediately.  Public Safety Minister Vic Toews is clearly not such a man.

“Fair-minded Canadians” from coast to coast are fed up with Vic Toews, his comparing us child pornographers and his police-state mentality.

Toews is far more Liberal than he is Conservative, something to which both his introduction of Bill C-30 and his admission that he had no idea what Bill C-30 contains can both attest.

If Vic Toews was a true conservative, he would be repealing all these atrocious warrantless search provisions from all the other Acts that contain it instead of attempting to slide in more of that Freedom-crushing legislation in Bill C-30.

Oh, how I long for a Conservative government that isn’t conservative-in-name only.