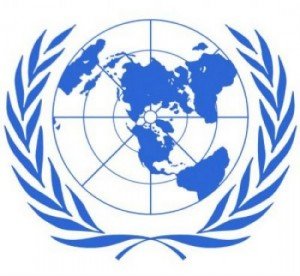 The United Nations is not a secret organization.

Everything said and done at the United Nations level is printed, published and online in the form of books, papers, documents and YouTube videos.

The problem is that much is written in invisible ink and the reader must possess the uncanny ability to read between the lines; every word is couched in innocuous-sounding, freedom-loving Double-Speak.

I don’t know if the intentions of some nations were good when the United Nations was formed by a bunch of Communists and the Charter signed in 1945 by the “morally righteous uplifters” to promote the “feel-good tenets” of “world peace”, “security” and “cooperation among nations”.

But the United Nations has certainly strayed off-course into an evil, slow-motion movement toward a soviet (council)-style world government.

The failed United Nations replaced the failed League of Nations, a “feel-good” international organization which resulted from the signing of the post-WWI Treaty of Versailles in 1919. It’s purpose was to achieve “international peace”, “security” and “international cooperation”–all the same “principles” as The League’s successor.

In reports coming back to me, the UN has become hated worldwide. The gullible, bleeding-heart UN reps become cocky, pretentious and obnoxious because they feel superior when in the presence of the dirt-poor countries where they are dispatched to “do good”.

They drive shiny new vehicles, are housed in swanky hotels, where, at the end of the day, they wash off the land’s slime with hot showers, change into fresh clothes, then quaff cocktails before ordering expensive dishes from the menu. The meals are prepared for them; served to them; and somebody cleans up after them.

If they would only look out the window, all around them is evidence of the oppressed people the UN is supposed to be assisting. Why aren’t the UN reps on the job, driving from family to family with food, medicine and lorries filled with clean water?

They can’t. They don’t have access to adequate supplies to distribute and wouldn’t know what to do if they did. A Peace Corps volunteer once remarked to me that “the whole of Africa is covered in a thin veneer of shit” and it is next to impossible to make a difference.

As one Malaysian “do-gooder” finally admitted in an interview, they are temporary visitors in these foreign countries for their own “self-aggrandizement” expecting to come out feeling “morally satisfied and uplifted”.

Basically, it’s nothing more than a salaried, expense-paid travel experience! After the UN reps are gone, they leave behind a land teeming with people who are probably worse off than before the “helpers” came to befriend them.

Multi-thousands of people have no clean water to drink much less to bathe in. In many places, what little water they do have has to be lugged long distances. Shanties are their shelters and they slowly starve to death with nothing more than maybe a morsel of food to fill their swollen bellies before bedding down on a mat or in the dirt to rest at night.

On top of these deplorable conditions, there is not enough medicine to treat even malaria that could be stemmed, yet it spreads like wildfire due to the UN environmentalists selfishly banning the effective, mosquito-killing DDT because the synthetic organic compound is “detrimental to the environment”.

These “do-gooders” make me want to throw up!

Further, the people are confronted with constant CIA-instigated wars raging around them while dictators live lavishly in their palatial quarters and pocket the foreign aid. The food and medicine donated from rich nations by-pass the masses and are forwarded to the local militaries.

The local people and local governments of individual countries are the only ones who have a thorough knowledge of the culture and have an understanding of the problems and how to fix them.

But the problems cannot be rectified until the higher echelon and the Big Banks stop stealing the money that has been loaned or donated to pay to correct these seemingly insurmountable societal ails.

Iranian militants taking American diplomats hostage for long sieges cannot be tolerated; nor madmen dictators the likes of the late Iraqi dictator Saddam Hussein “welcoming” American engineers contracted to come into the country to build dams, highways and other infrastructure by imprisoning them for an indefinite stay in a hotel “as guests of the state”.

Heads of these third-world countries don’t care about breaking “international conventions” to send messages to enemy country. They do not appreciate meddlers any more than Canada or the U.S. would want uninvited outsiders dictating how to run our countries–which is exactly what is happening at the United Nations level.

Sixty-five years is long enough. If the industrialized countries haven’t been useful within that time slot in solving third-world country problems–food, medicine, water, electricity, infrastructure, radios, computers, schools (not the American-built ones the Afghans transferred into training centers to teach students how to construct improvised explosive devices (IEDs)–the message is very strong that politics has grossly interfered and governments can’t do anything right.

Let the locals, assisted by competent individuals, churches and service organizations, deal with the problems. They’ll get the job done. But the United Nations has to stop putting environmental and other restrictions in the way of progress.

In radio interviews, American soldiers and veterans have spoken resentfully of being garbed in a UN helmet and driving a UN Jeep when going into these foreign lands. They are Americans who proudly took an oath to uphold the Constitution of the United States of America when enlisting to serve their country. They expect to be turned-out in USA gear and associated with representing their own country.

Instead of sitting back and letting the United Nations dismantle industrial civilization piece by piece, to my way of thinking, it is way past time that the United Nations be dismantled and the corrupt, disreputable, despot clowns booted out of New York City and sent packing back to live in the squalor of their own homelands.

What the people in Geneva, Switzerland want to do with them is their business.

But the 37-floor building in NYC could be put to better use if converted into low-cost housing units.

And I am not convinced that the destructive, money-wasting international organization needs replacing any more than it needs relocating. The United Nations replaced the League of Nations that was dysfunctional for the same reasons that the European Union is a write-off.

The ordinary Europeans, who don’t have a vote but must pay the bills, have to suffer the consequences when the thieving, graft-raking, fiscally-irresponsible bureaucrats in charge, who don’t know how to reconcile a personal chequebook much less read a financial statement, drag member nations down into the bankruptcy gutter.

When the first country, probably Greece, has the fortitude to withdraw from the European Union and return to its traditional drachma currency in order to control its own destiny, other countries will follow the leader.

Likewise, when the first member state, hopefully Canada, has the sense to withdraw from the UN, other countries burdened under this worthless organization will follow the leader.

In 1983, the American Deputy UN Ambassador told other UN members that if they wanted to move UN headquarters out of the United States, the Ronald Reagan administration would do nothing to stop them.

Charles Lichenstein, America’s alternate representative for special political affairs to the United Nations, is fondly remembered (at least by me) for controversial comments he made welcoming the possibility of relocating the United Nations headquarters outside of the United States.

“We will put no impediments in your way,” Lichenstein said. “The members of the U.S. mission will be down at the docks waving you farewell as you sail into the sunset.”

As the esteemed journalist Conrad Black wrote in a December 2010 column captioned The U.N.: Symptom of Global Chaos,

“It’s a dangerous playpen in an increasingly dangerous world. The conduct of the United Nations seems to be becoming more and not less bizarre and outrageous.

“The human-rights performance of both the Human Rights Council and the General Assembly has confirmed that, more than ever, the U.N. is a ludicrous playpen for the failed states and most odious despotisms of the planet.

“They gleefully and churlishly revile the serious powers, as if in doing so they somehow reversed the balance of strength, moral stature, and civic merit.”

The remainder of Conrad Black’s column can be read at: