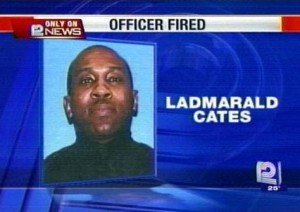 When you dial 9-1-1 you expect the police to arrive and help you.  The very last thing you think you’re doing is calling Dial-A-Rapist, yet that’s exactly what happened to a 19-year-old Milwaukee single mom who cannot be identified by law as a victim of sex crimes.

Within minutes of her 9-1-1 call, a police cruiser arrived with two police officers inside it.  The first took the woman’s 15-year-old brother outside “for questioning”, while Officer Ladmarald Cates gave her boyfriend money and told him to go to the store to get him some bottled water.

That left the rapist cop alone in the house with the 19-year-old single mother. Taking full advantage of the circumstances he manufactured, he proceeded to sodomize and rape her.

The young single mom had managed to escape the inner city ghetto, complete her high school diploma and was attending the University of Wisconsin where, until being raped by Officer Ladmarald Cates, she had planned on becoming either a police officer or a lawyer.

“I wanted to be a good example to my kids,” she would later say. “I wanted to learn something, be somebody.”

It takes a special kind of young woman to pull herself out of the inner city life, yet she had done that, all while raising two young children.  Her life changed dramatically the day someone tossed a brick through her window, however.  That event prompted her call to Dial-A-Rapist instead of the police assistance she actually required.

After being raped and sodomized by Cates, she ran out of her home, vomited from the horror of her attack and began screaming about being raped by Cates.  She was then handcuffed, taken to the police station and told she would be charged with assaulting a police officer.  While in the holding cell she continued to vomit and scream that she had been raped.

All the other cops ignored her.  She was just another lying woman upset about being in jail, right?

She was finally taken to the hospital after 12 hours and examined for evidence of rape, after which she was taken to the county jail for another four days while her rapist, Officer Ladmarald Cates, went home to his family every night and slept in his own bed, confident he had gotten away with it again.

After four days in the county lockup, she was finally released without being charged.

She told her story to a prosecutor at the Milwaukee District Attorney’s office.  While he found her credible, the prosecutor did not believe that was enough to convict Officer Cates of rape.

Cop vs. inner city single mom.  Conviction Rates ahead of justice.  Is it any surprise the Milwaukee DA would not go to bat for this young rape victim?

Cates was eventually confronted by Internal Affairs with DNA evidence linking her to the young woman’s rape, at which time he told a number of different stories, eventually settling on ‘she wanted it’ or words close to it.  Officer Ladmarald Cates was eventually fired for lying and “idling and loafing on duty”.  He was never held responsible for raping the young woman who, before his attack, had a very promising life ahead of her.

In the aftermath of the rape, the horrific treatment by police and the refusal of anyone to prosecute Officer Ladmarald Cates for what he had done to her, the young woman became very despondent and went so far as attempting suicide not once, but twice.

She nearly succeeded in ending her young life, all because nobody had the balls to prosecute a cop who liked to rape young women.

It was and is a disgrace that just because someone wears a badge, his word is automatically taken as Gospel despite all evidence to the contrary.

When police forces cover up the crimes of their officers, it brings their entire force into disrepute.  The Milwaukee Police Department should be ashamed of the treatment of this young woman and the whitewashing of Officer Ladmarald Cates’ crimes by Internal Affairs.  They were far more concerned about protecting the public image of the Milwaukee Police Department than justice for a rape victim.

Then a miracle happened.

The young woman stumbled across a photograph of Milwaukee defense lawyer Robin Shellow on the internet.  She called Shellow’s office and made an appointment to see her.

Shellow took the case and brought in Assistant U.S. Attorney Mel Johnson to listen to the young woman’s story.  Just like the Milwaukee DA before him, Johnson also found her to be a very credible witness.

The difference was that Mel Johnson had the balls to prosecute the sexual predator cop.

While none of the information could be used in court, it turned out that the 19-year-old single mother was not Cates’ first victim.  Given the brazen nature of her rape, that makes sense.  It takes someone with a lot of prior “experience” to be so bold as to rape someone while his partner is standing outside the house, just a few metres away.

Cates had been investigated five times before, three of them for sexual offenses.  He had attacked two prisoners and then a 16-year-old girl.  As with the 19-year-old’s case, the Milwaukee district attorney’s office did not have the balls to prosecute Officer Ladmarald Cates, literally giving him a free pass to rape again.

On January 11, 2012 Officer Ladmarald Cates was found guilty of raping the 19-year-old single mom.  He will be sentenced in April and faces a maximum of life in prison.  If there is any justice left in the Milwaukee justice system, that’s precisely what he will get.

Victims of sex crimes have the option of remaining anonymous in Wisconsin, and that’s exactly what this young woman has chosen, and for obvious reasons.  Who wants to go through life being labeled  “the woman who was raped by that cop, Ladmarald Cates”?

Now that her rapist has finally been convicted for what he did to her, this brave and tenacious young woman feels she can get on with her life.  She’s back to being a single mom to her kids and is doing her best to be the hero she was to them before Officer Ladmarald Cates shattered her life so horrifically.

To this brave young woman: I congratulate you on your determination and tenacity to bring this rapist to justice.  I sincerely hope and pray that you will carry on the way you started out: with dignity and determination to give your children a better life.  I also pray that you find the career path that gives you satisfaction and allows you to help others, the path you clearly seem determined to follow.

To Officer Ladmarald Cates: There is a special place in hell reserved for you.  If there is any justice here on earth, you’ll experience a taste of what that eternity in hell will be like inside federal prison.

To Robin Shellow and Assistant U.S. Attorney Mel Johnson: Thank you both for believing in this incredibly brave young woman and for finally bringing this serial rapist to justice.

Finally, to the Milwaukee District Attorneys who declined to prosecute Officer Ladmarald Cates for rape before this happened, shame on you. You placed conviction rates ahead of justice for rape victims, not once, but twice.

You now have to live with the fact your cowardice led directly to this young woman’s rape and sodomy at the hands of a serial rapist cop. How many more rape victims are there because you were too cowardly to do your job?

That cowardice disgusts me more than I can possibly express.

I just pray that the next time some poor young woman comes to you and says she was raped by a cop you will have the courage and the integrity to do the right thing; to place justice for the victim ahead of your own conviction rates.