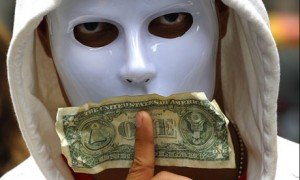 The so-called “occupy” protestors in Providence, Rhode Island showed the world just how classless they are.  I’m really not surprised.  The entire “occupy” movement has been pretty much about whining about how the world hasn’t given these self-absorbed, selfish little crybabies enough to satisfy their sense of entitlement.

The entitled ones in Providence, for example, were about to have their camp shut down by city officials when the Roman Catholic Church stepped in.

Imagine that… a church sticking up for a bunch of whiny little crybabies who are about to be kicked out of an illegal camp.  You’d think these folks would be grateful, right?

Not these unwashed and smelly protestors, as they call themselves… They were demanding the City of Providence open up a daytime homeless shelter for the winter.  The City said no.

The protestors had been occupying Burnside Park since October 15, 2011, making a mockery of law and order as well as a garbage dump out of the park.  You know, just like every other “occupy” camp across North America.

Catholic Bishop Thomas Tobin met with City officials to come to some sort of agreement on having the Roman Catholic Diocese of Providence open a daytime shelter at their Emmanuel House facility, which already operates and emergency shelter out of that location.

“I consider this a victory for Occupy Providence standing up for the most disenfranchised people that don’t have many people standing up for them,” protester Robert Malin said. “It shows that with pressure from people, a government can be made to move.”

Apparently he missed the point that it was the Roman Catholic Church that was making this happen, not the city, but that’s okay.

In a statement Monday night, Mayor Angel Taveras thanked the diocese and Bishop Thomas Tobin and city officials who worked for a solution.

“This would not have happened without the Diocese of Providence’s involvement and willingness to help in this effort, and I am extremely grateful to Bishop Tobin,” Taveras said.

So now that the protestors are getting what they claim they want, it’s time to kick sand in the faces of the very people giving it to them.

Here’s an excerpt from BusinessInsider.com:

Apparently they don’t dwell on the meaning of gratitude. The very next day they set out to Occupy the pro-life rally.

This sort of behaviour is typical for folks who believe they are entitled to the contents of everyone else’s wallets… isn’t it?  Take everything they say they want, and then show just how ungrateful they are for having received it.

They claimed, naturally, the condoms were unused, as if that somehow transformed their disgusting actions into some sort of saintly act.

The Pro-Life Rally had been scheduled for some time.  The Occupy protestors obviously believe they can protest anything and everything, including a baby’s right to be born instead of being murdered inside its mother’s womb.

Fair enough.  But as someone recently said to me,

“I absolutely agree that it’s the woman’s right to choose, but the choice is not between killing her unborn baby or not, but a choice between closing her legs nine months earlier or not.”

That said, back to the events at hand…

Bracy had an inkling something was up in the nights before the demonstration when the Facebook page for the Rhode Island Right to Life was continually being defaced. But as the pro-lifers were giving their speeches in the statehouse, the Occupiers began filing in, and Bracy noticed that they were very well organized in their tactics

“[The Occupiers] started spreading themselves out – they didn’t do anything until all of them got through the security checkpoint. They brought their cardboard signs. They don’t push you. They just stand so close they make you feel uncomfortable because they smell so bad.”

A couple of women from Occupy started dancing in front of the podium the pro-lifers were using. The Occupiers started whistling, heckling, and chanting.

Bracy was scheduled to give the last address to the crowd. “I got about twenty-five percent through my speech before I couldn’t even hear myself.” Bracy decided that at this point it was futile to continue. So he invited Fr. Bernard Healy to give a closing prayer.

Healy was interrupted and shouted down. “And that’s when the condoms started coming down,” Bracy said,  before rushing to tell us that they were “unused.”

“It really was mayhem, is what it was,” Bracy said.

Bracy had formerly considered himself sympathetic to the Occupy movement. “I remember the Savings and Loans scandals. People went to jail. I thought Occupy Wall Street was about that. Having investigations. But this is the first time they are speaking clearly about an issue and they’re standing up for abortion and using blackshirt tactics,” Bracy said, referring to Moussilini’s early and racous fascist movement.

Apparently this shows that for at least some Occupy groups, there are other pressing issues beyond inequality in America.

Any sympathy I may have had for the occupy protests and their mission (whatever it was!), I sure don’t any more.

These classless pigs not only treat young women disgustingly by tossing condoms into their faces, they bite the very hand who, just the day before, had stepped in to give them exactly what they said they wanted, somewhere warm to hang out for the winter.

I hope the Roman Catholic Diocese of Providence changes their mind and leaves these pathetic jerks outside in the cold.

Maybe a few more months of freezing their butts off will teach these classless swine some manners.

I know… I know… That’s nothing but wishful thinking on my part.