PETA, or People for the Ethical Treatment of Animals, is a group of animal-loving yahoos who believe that animals are more important than people.  They recently announced yet another attention-grabbing publicity stunt that proves just how ludicrous these people are.

PETA is willing to abuse any program or any person if it will advance PETA’s anti-human agenda.  Their latest show of stupidity comes at the expense of human beings killed on the highways of Illinois, in particular a law passed in honour of Tina Ball, a mother of seven who was killed by a drunk driver.

You see, in October of 2011 a truck overturned on Interstate 74, killing 4 cows inside the truck.  A couple more cows escaped the overturned vehicle and were struck by oncoming traffic. 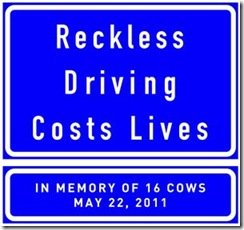 As a result of the loss of bovine life, PETA wants to erect signs on the highway chastising drivers and memorializing the dead cattle.

No,I’m not making this garbage up.  I’ve got a good imagination, but even I can’t concoct this sort of asinine tripe.

“PETA: Proving Not All Humans Have Brains”

The lack-of-brains-trust (it’s sure no brain trust!) at PETA have always considered human beings nothing more than a blight on the planet that must be obliterated.

Here’s a thought: how about PETA lead by example and just kill themselves en masse.  If nothing else it will enrich the quality of the gene pool. Anyone who blatantly hates the human race as much as PETA does really shouldn’t be bothering the rest of us anyway, right?

I mean really… how can you take someone seriously who makes this claim:

“We’re fighting for the cows that died.”

No concern for the human beings who were hurt or killed, just mindlessly “fighting for the cows that died.”

That blather fell out of the brainless head of Tracy Patton, one of PETA’s Chicago spokes-morons.

The law they are attempting to abuse was brought in after the death of Tina Ball, a human being and mother of seven other human beings who was killed when her vehicle was struck by one driven by a drunk driver.

PETA is very willing to abuse and denigrate the memory of Tina Ball if it will help them advance their “animals first” agenda.

Now normally I don’t pay much attention to the antics of PETA, but this one just flat-out pissed me off.

A mother of seven is vastly more important than an entire truckload of cattle, PETA’s asinine stance notwithstanding.

PETA, I’m sure, would applaud if a busload of children were killed, but is upset because nobody cares about a couple of dead cows.

I personally find it disgusting that human beings would attempt to tarnish the memory of Tina Ball, mother of seven, just to advance their ridiculous anti-human agenda.