The Canadian justice system leaves a lot to be desired, even on its best days.  On its worst days, it is a repulsive indictment of our apparent love for a violent serial rapist and murderer and our blatant abhorrence for honouring the memory of a precious young woman, brutally raped and stabbed dozens and dozens of times. 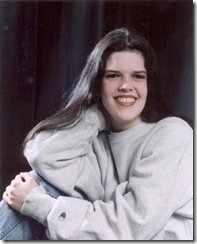 Tara Manning was a beautiful young 15-year-old the night she was brutally raped and murdered in her own home in 1994.

The Haitian-born man who committed this brutal crime decided to game the system, and applied for an Aboriginal Parole Hearing.  As bizarre as that sounds, the bureaucrats in charge of making the decision on whether or not to allow this travesty didn’t bat an eye before stamping “APPROVED” on his application.

Now, I must admit that I am very offended, indeed outraged that this sort of stupidity can go on in the Canadian justice system.

But my outrage must be the pathetic mewling of a colicky baby compared to the outrage and sense of betrayal that Tara Manning’s father feels, and rightfully so.

“It’s like sticking another knife into our family — he stabbed Tara 51 times, what kind of crap is this?” Michael Manning asked Tuesday in an interview from his Montreal-area home.

Can you imagine the absolute horror of walking in to your daughter’s room to turn off her alarm and wake her up, only to discover her brutally murdered body, stabbed 51 times by the psychopath who raped her in her own bed?

For a parent that is a nightmare image that will simply never be erased.

Then to be forced to take part in an Aboriginal Healing Circle for the pond scum who raped and murdered your little girl?

That must be like re-discovering her dead body all over again.

“How would you feel sitting less than 10 feet away from the person that slaughtered your daughter? Not a day that goes by that I don’t think about my baby,” Tara’s father, Michael Manning said.

In the wake of his daughter’s brutal slaying, Michael Manning headlined a campaign that led to a law requiring suspects in major crimes to provide DNA samples to police.  It was DNA evidence that ultimately identified Gregory Bromby as the perpetrator and led to his conviction of First Degree Murder.

Gregory Bromby, the man convicted of her murder through DNA evidence, did what murderers do when they’re caught: he lied and lied and lied some more.

For over a decade he claimed he was innocent, that someone else had committed the heinous crime.  For years he claimed that he had a relationship with Tara, a lie he eventually confessed to.

It wasn’t until his 2007 parole hearing, a full 13 years after his crimes, that he actually admitted that he had raped and murdered Tara Manning.

“He was called a psychopath during the murder trial in 1998. I don’t expect him ever to be better. I don’t expect him to ever have a life where he can be a good part of society,” said Manning, who flew to Winnipeg to give his victim’s impact statement.

“I wish it’s something that I could just let go, but I think of the people he is going to harm, like Tara, if he gets out,” said Manning.

Naturally, the Justice Minister and Minister of Public Safety have absolutely no comment on this case.

Shocking, isn’t it, when government ministers attempt to hide from the bureaucratic incompetence of their employees?