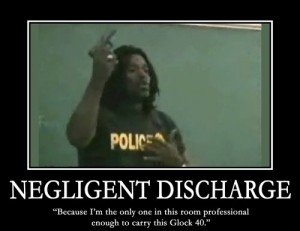 Lee Paige, the DEA’s poster-boy for how NOT to handle a firearm, is apparently still a Drug Enfrocement Agency (DEA) special agent stationed in Orlando, Florida, according to a report found online.

“I’m the only one in this room professional enough, that I know of, to carry this Glock 40.”

Needless to say, the video (see below) went viral and because DEA Special Agent Paige’s gross stupidity and arrogance was captured on video, it ended his undercover career.

It should have ended his entire career, but federal agents are, it seems, an endangered species so he was protected at all costs, including common sense.

I had to laugh when I stumbled on the news report of DEA Special Agent Paige’s court follies because I was searching for this video just a couple of days ago to include here on the site as an example of what happens when arrogance gets in the way of firearm safety.

I guess he was trying to salvage some of his lost dignity when he sued his employer for releasing the video to the public.  The thing is, the video wasn’t created by anyone in the DEA. It was created by one of the parents of a student in the class.

Such trivialities were of no concern, of course, since the DEA has much deeper pockets, right?

He even went on television to try his case in the court of public opinion (video below) , but I don’t think that gained much traction.

While he may have done a lot of good as an DEA agent, a claim I find highly suspect given the entire DEA should be disbanded for crimes against humanity, he tried to make that case on television anyway.

His court case against the DEA took years to wind its way through the courts, and finally in December of 2010 a federal district court judge dismissed the case.

The judge in that case found that Mr. Paige had failed to provide evidence proving the video was obtained from the DEA, or that even if it was, that releasing the video was “intentional or willful”.

Naturally, not wanting to let go of the only cash cow he had on the hook, Mr. Paige appealed that federal district court decision.

On Tuesday, a three-judge panel of the District of Columbia U.S. Court of Appeals upheld the dismissal. The appellate court said in its ruling that the video contained no “private facts,” the accidental discharge of the gun occurred in a public place, “and Paige knew he was being video-recorded.”

DEA Special Agent Lee Paige’s Negligent Discharge, caught on tape for all the world to see