It’s really not surprising to find more NDP hacks coming out of the woodwork crowing how the country will collapse into anarchy of the error-riddled gun registry is killed, as Conservatives plan. 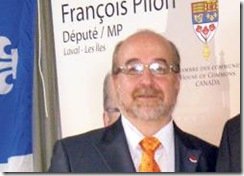 Clearly looking for some easy and free publicity, Pilon used the Laval Police Department chief as his crutch to stand before the usual media circus to claim “the sky is falling!”

I guess he couldn’t be bothered to pay attention when the hearings for Bill C-19 were going on late last year.  If he had bothered to pay attention, he would have heard the head of the Canadian Association of Chiefs of Police (CACP) actually admit, under oath and on camera, that the CACP has routinely fabricated the numbers of times the gun registry is used by police.  Their rationale? They needed a good sound-byte to “prove” the gun registry is a success, despite all the actual facts proving quite the opposite.

Ah, the life of an NDP political hack… must be nice to parade your pathetic and soulless carcass before media cameras and have the good Taxpayers of Canada pay you over $160,000 per year to do it!

“The adoption of C-19 will mean police officers will no longer have any means to know where they can find long guns,” says NDP hack François Pilon.

“It is a vital tool for preserving Canadians’ safety – often women and children living in a conjugal violence context – but also to fight firearms contraband. The planned destruction of all the registry data will instantly deprive police officers of the much needed information they use to trace these firearms.”

What a joke.  I am willing to bet you there isn’t a cop in North America, not just Canada, who is willing to attend a domestic violence call accepting the word of a police database that there are no firearms present.

Doing so is practically guaranteeing their own death!

Any good and decent police man or woman will PRESUME there are weapons at a location until they can PROVE otherwise.  Like I said, they’ve got to be suicidal to do otherwise, especially given the massive error rate of Canada’s firearms registry.

Yet here we have another political moron spouting off the same old tired lies used to sell Canadians on the gun registry in the first place.

Fool me once, shame on you.  Fool me twice…

Clearly it’s high time we demanded that both MP salaries and MP pensions be slashed to the average Canadian family’s income.

Maybe then they would actually pay attention to us, the very people who sent them to “represent” us.

The gun registry was always the red flag waved in front of the angry “bull”, Canadian law-abiding firearm owners, back when Bill C-68 was before Parliament.  By successfully managing to get firearm owners to focus on gun registration, they were able to easily pass the firearm owner licensing system that is the real evil of Canadian firearms law.

Rapists, child molesters, drug dealers and welfare recipients all have more rights under the law than Canadian law-abiding firearm owners.

None of them are subject to warrantless searches on the whim of a government bureaucrat.