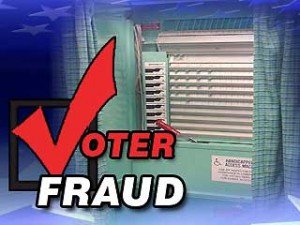 As bizarre as it sounds, dead people are able to vote in the primaries due to lax rules and no identification requirement.

Voter fraud is an ongoing issue in America, to be sure.

Helping the problem along are state rules that do NOT require a person to show any identification to prove they are who they claim to be.

Evidence of this insanity was documented recently through the New Hampshire primary process by Project Veritas, a group dedicated to exposing voter fraud, among many other issues.  You can watch the video compiled by Project Veritas at the end of this article.

Project Veritas was founded by James O’Keefe. The mission of Project Veritas is to investigate and expose corruption, dishonesty, self-dealing, waste, fraud, and other misconduct in both public and private institutions in order to achieve a more ethical and transparent society.

A laudable goal, to say the least, and one that founder James O’Keefe is determined to achieve.

He already has a great track record, as he says on his website:

James is most well-known for his 2009 ACORN investigation, which exposed systematic corruption in multiple offices, such as the facilitation of child prostitution, human trafficking and tax evasion. The U.S. House and Senate promptly voted to defund ACORN and the U.S. Census cut ties with the group. The organization was ultimately forced to disband.

Below is the video that James’ organization compiled after repeatedly going to polling stations across New Hampshire during the vote in the New Hampshire primary that ultimately saw Mitt Romney come out on top.

The question one is forced to consider after watching this video is, of course, how many dead people voted for Romney, and did this give him the edge in that state’s primary vote? <LOL>

On January 10th, Project Veritas reporters walked into New Hampshire Polling Locations during the Presidential Primaries, saying dead people’s names. We stated the name of a dead person we got from the NH obituaries. The names of the deceased were both Registered Republicana and Democrats.  In almost every case, saying a dead person’s name, we were handed a ballot to cast a vote. We used no misrepresentation and no false pretenses. in fact, in almost every case, we insisted we show ID and they insisted that we vote without showing ID.