It’s hard to believe that a year has passed since the death of Aaron Zelman, the founder of Jews for the Preservation of Firearms Ownership (JPFO).  It feels like the shock of that news was only delivered yesterday for me, not a year ago. 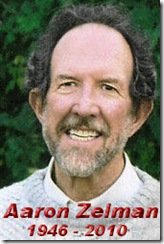 I am reminded of Aaron’s passing today by Rabbi Dovid Bendory’s Yahrzeit Tribute to Aaron Zelman, which he just emailed to me and other JPFO supporters.

Aaron was an inspirational marvel, among many other things.  As I wrote about one year ago in the wake of that shocking news of his death, it was Aaron’s inspiration and vision in creating the JPFO’s first documentary. Innocents Betrayed, that prompted me to create three documentaries of my own about Canada’s battle for freedom and our Firearms Act.

As Rabbi Bendory reminds us in his article today, one of Aaron’s oft-repeated phrases was “If a murderer pursues you, strike him down first.”

Of the many passages of Torah we studied together, the one that most characterized Aaron’s approach to life is one you have heard from both him and me many times: “If a murderer pursues you, strike him down first.”

This commandment characterized Aaron not only because he was such a staunch defender of the right of self-defense. Yes, Aaron understood the Holiness of life and the gravity and seriousness of the possibility of facing a situation in which he would be forced to take a life in self defense. Yes, he was prepared to do so, emotionally, psychologically, spiritually, and physically. But more than that, Aaron integrated the principle behind this Talmudic dictum into his life.

What principle is that?

To be more literal in translation, the Talmud says: “He who is coming to kill you — awake early in the morning and kill him.”

The Talmud is teaching that self defense does not begin when a killer has a knife at your throat. It does not begin when the armed killer has isolated his intended victim. Rather self defense begins at the time the murderer begins to pursue his intended victim. At that moment, the murderer may not yet be armed. Indeed, he may even still be asleep. But if you know for sure that when he awakes he will attack with lethal intent, then in G-d’s Law both his intended victim and any other righteous party are justified in using all necessary force, including deadly force, to strike down the intended murderer. If we wait, it may be too late.

In the wake of another self-defense shooting in Seattle just the other day, and the much written about experience of Sarah Dawn McKinley on New Year’s Day, I personally find Rabbi Bendory’s words particularly timely.

The media is always quick to pounce on the victim of the crime who is forced to defend themselves with lethal force, like Sarah McKinley was, or like the homeowner in Seattle the other day.

“Why did he have to shoot my son five times?”

Those were the words spoken by the distraught mother of the young man who was killed after he broke into a man’s home in the middle of the night.

Naturally, every media outlet in the land spewed that clip as far and wide as they possibly could, forgetting all the while that this homeowner only did what police across North America are trained to do: shoot until the threat is stopped.

If that means one shot, great.  If it means that someone is still coming at you after you have already placed three bullets in him, clearly he is still a threat and you MUST keep shooting if you hope to survive the encounter.

Police are trained to do this precise thing, yet when a homeowner does it defending themselves, somehow the media just can’t paint them with a big red “psycho” brush.

Nothing could be further from the truth, and I guess that’s where Rabbi Bendory’s missive today really struck me.  Aaron Zelman was nothing if not a staunch advocate of self-defense.

“If a murderer pursues you, strike him down first.”

That this phrase was one of Aaron’s favourite and inspirational pieces of the Talmud comes no surprise.  I guess I’d be shocked if it wasn’t!

I strongly encourage you to read Rabbi Dovid Bendory’s entire Yahrzeit Tribute to Aaron Zelman. You won’t be sorry.

While you’re there, please make a donation of $25 to the Aaron Zelman Memorial Fund to help the JPFO finish Aaron’s last project.